Algonquin Power is an operator of regulated utility and renewable energy assets in North America and some South American regions. We like this utility company for its reliable revenues derived from long-term contracts and its growing operations in “green” renewables. However, it is certainly not on our priority list as long-term oriented investors.

Formed in 1988, AQN began as a business venture as an Independent Power Producer that developed hydroelectric projects, the first of which was developed in Hastings County, Ontario.

In 2001, the company entered the utility business by purchasing a rate-regulated water and wastewater facilities in Arizona. Shortly thereafter, infrastructure was obtained in Texas, Missouri, and Illinois. From this, Algonquin continued to grow and began to dip its toes into wind generation in 2004, electric utilities in 2009, solar power in 2014, and more renewable energy infrastructure with partnerships and acquisitions from then on.

Today Algonquin Power & Utilities Corp., as the name signifies, operates across a variety of power and utilities services. AQN is divided into two main groups of subsidiaries, which also represent the two major business segments of AQN:

The Regulated Services Group (“RSG”) owns various electric, natural gas, water distribution, and wastewater collection systems and transmission operations across the United States, Canada, Chile, and Bermuda. Revenues in this group are capped due to rate regulations imposed by governments in the mentioned operating regions. RSG is also known as the Distribution segment.

The Renewable Energy Group (“REG”) is the unregulated unit of AQN, operating in the realm of renewable and thermal electricity generation across North America and some international regions. AQN’s hydroelectric, wind, solar, and thermal assets generate clean and renewable energy, which are primarily sold under long-term contractual agreements. RSG is also known as the Generation segment.

RSG (Distribution) makes up most of AQN's revenue balance and has recently grown bigger with the acquisitions of Empresa de Sanitarios de Los Lagos S.A. (“ESSAL”) and Bermuda Electric Light Company Limited (“BELCO”). Without acquisitions or inorganic growth, AQN grows revenue organically at low- to mid-single digits. Although organic revenue growth is rather muted, those revenues are highly predictable and mostly recurring like clockwork.

Most of RSG’s Net Utility Sales are generated in the US while Canada and International regions share the remaining. Distribution services are provided in 13 US states, New Brunswick in Canada, and Bermuda and Chile as the international locations.

AQN’s high-growth and arguably most important segment, renewable energy generation, has over 80% of output contracted under long-term agreements.

The weighted-average remaining contract life is approximately 13 years. This provides two main advantages for AQN as the world moves towards cleaner and greener forms of energy: 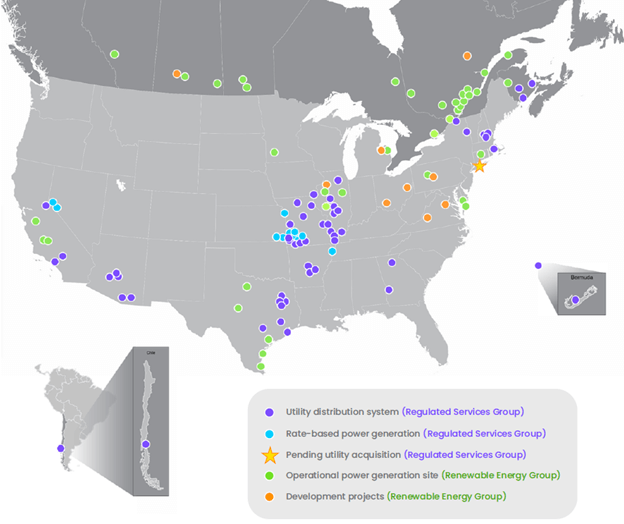 The capital intensity of an industry like utilities is a competitor deterrent, especially if well-established incumbents continue to scale their operations across many regions.

Capital expenditures have recently been in the zone of 30 - 50% of revenues in each year. AQN operates in such a capital-intensive industry where emerging players would not choose to commence operations alongside players like AQN. The upfront costs are also so high it would take years before any of the initial investments bear fruit and render the company profitable.

The industry is characterized by natural monopolies over various regions.

AQN mobilized lots of money over the past few years on new capital and expansive investments. However, there is plenty more where that came from. AQN recently initiated a five-year capital program worth $9.4 billion between 2021 and 2025.

These investments will include organic investments and business acquisitions that make up a significant fresh pipeline of regulated utilities and renewable energy assets. 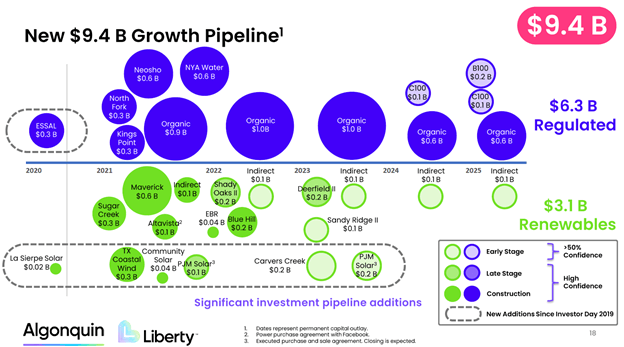 These investments are also diversified on the risk spectrum – some are in their early stage of development and more "speculative" with higher upside, while others are in the process of constructions with near certainty of closing. Few of these projects would be classified as something in between the "boring" regulated investments and the developing renewables assets.

For a utility company with limited growth otherwise, AQN appears to be executing its merger and acquisition ("M&A") strategy well. We believe dividend-focused investors should be impressed with AQN’s ability to make sound acquisitions that provide ample growth opportunities.

The Future is Green

AQN is uniquely positioned to lead and benefit from the drive towards renewable energy utilization over traditional forms. The company already generates 10-20% of its revenues from such initiatives and will continue to invest in this realm as the world continues to strive towards a greener future.

AQN is making big moves in this space –AQN is partnering with Altantica Sustainable Infrastructure to purchase a 20-megawatt solar plant with a 15-year power purchase agreement (“PPA”) in Colombia for a combined $20 million once operational in mid-2021. This would be the first such investment in the country from either company, expanding their reach in renewables beyond North America and potentially opening the door for growing its asset base in South America.

AQN has also been partnering with customers to achieve their own emissions goals.

Governments, Facebook, Starbucks, Amazon, and General Mills are among some of the companies that work with AQN to drive this revolution.

In July 2020, AQN and Chevron – a multinational energy exploration, refining and marketing, and production corporation – announced a four-year agreement to co-develop renewable power projects that will provide electricity across Chevron’s strategic asset base. The partnership plans to generate more than 500 megawatts of clean electricity and advances Chevron’s important goal of reducing its carbon footprint as oil companies face ever-growing scrutiny against their operations.

Again, these are just a few examples of the developments in which AQN is currently partaking – there is plenty more where that came from. Incremental to the $9.4 billion five-year capital program is a group of Greenfield developments, a pipeline with over 3,400 megawatts of greenfield opportunities. These investments include earlier, more speculative projects, as well as later-stage developments with more quantifiable benefits. AQN is exploring the entire risk spectrum in a prudent fashion to exercise growth opportunities now and in the future. 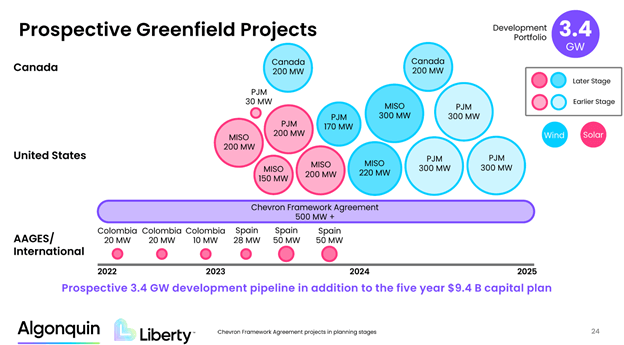 We believe AQN is ready to ride this early wave of green initiatives and the shift towards a greener world.

Hydro, wind, solar, and other renewable energy sources make up a relatively small proportion of the world’s electricity generation today, but renewable energy consumption and production is expected to be the fastest growing form of energy throughout the next few decades, taking over fossil fuels around the year 2050.

AQN is right on the forefront of this revolution, and its strong asset base, partnerships, customer relationships, and prudent acquisition strategies should result in the company being cited as one of the leaders of this shift.

AQN is a classic example of a quality dividend paying company. The operations of the company are stable, resilient, and profitable. AQN’s dividend payout ratio as a percentage of its adjusted funds from operations has consistently remained below 50%.

Although the ratio has been rising over the past five fiscal years, we believe the ratio is still healthy and AQN has enough growth and reinvestment opportunities to ensure a steady growth rate over time.

Utility operators in the US are awarded an “allowed return on equity" (“ROE”), the amount of ROE an operator is allowed to or expected to generate on its assets at a particular set of rates for utility services provided.

These service rates and allowed ROE amounts are set by the Federal Energy Regulatory Commission (“FERC”) and are intended recoup a company’s investment outlays and other expenses within a reasonable time frame. This allowed ROE amount has generally floated around 10%, essentially guaranteeing investors an adequate return on equity and company growth.

For AQN investors, this likely means the dividend is safe and will continue to grow at high single-digit rates for the foreseeable future.

AQN expands its operations mainly through acquisitions, particularly in the non-regulated segment of its business. The main risks include general execution risk and diluting current shareholders if financed with equity (i.e., issuing new stock). These risks can be further perpetuated if synergies are not realized, or accretion is subpar. Over the last few years, AQN also issued billions in equity. Management recently closed a mandatory convertible equity units finance offering of $1 billion to fund a portion of the front end-loaded $9.4 billion capital program in 2021.

AQN’s base case of an 11.2% rate base CAGR through 2025 may not materialize due to regulatory uncertainty surrounding rate reviews or permits to construct new, promising infrastructure. If regulators do not recognize the value of some of AQN’s investments and the positive impact they pose to customers or deem certain investments ineligible for consideration in their rate reviews, AQN may be placed in a position where growth opportunities are denied and allowed ROEs could be too low to recoup capital outlays and other expenses within a reasonable time frame.

Over 80% of AQN’s revenues come from rate-regulated jurisdictions for its distribution business. General economic hardships, new political parties, customer complaints, anti-monopoly regulations, and unfavourable rate reviews could all hinder AQN’s ability to earn a decent profit in any of the jurisdictions in which it operates.

AQN is part of an important movement to shifting the world to a greener and more sustainable future. Although the company operates mainly in the non-regulated distribution business, it is exercising optionality in the renewables space. Around 10-20% of its revenues come from renewable energy generation, a business that will only become more crucial as companies, governments, and other organizations band together to meet climate goals and move away from sole dependence on fossil fuels.

AQN is a high-quality company operating in a secular growth environment. Its long-term renewables contracts, large and expanding multicontinental asset base, and capital-intensive business shields it from competition as demand for its services ramp up. AQN also pays a healthy dividend yield at a moderate and sustainable payout ratio.

Dividend investors, rejoice – the company is expected to grow at a stable pace, and it is likely not disappearing anytime soon, which should allow the dividend to continue increasing in line with earnings.