Alphabet is arguably the best business in the world with its main business (Google Search) being monstrous in size while still growing rapidly. Besides holding and sharing the world’s knowledge within Google Search, Alphabet’s YouTube and Cloud segments help creators and businesses grow. Today, we use Alphabet as the benchmark for considering new investments and so we think there is lots of value today.

Alphabet Inc. is a conglomerate (a collection of businesses) formed in October 2015 after the restructuring of Google and several of its former subsidiaries under a holding company structure.

Although Alphabet is best known for Google and its massive search engine, Alphabet has evolved from a company solely focused on making the world’s information accessible to everyone to also helping individuals and businesses get things done.

Google Services represents the largest segment but Google Cloud is the quickest growing business in the Alphabet universe.

Google Services include products and services we all know and use daily. Chrome, Gmail, Android, Google Drive, Google Maps, Google Photos, Google Play, Search, and YouTube all have a place in our lives and allow us to do close to anything, from answering emails to organizing travel photos, helping us navigate a new city, or finding the answer to nearly any question we can think of.

We are all the “product” of Google Services. Companies advertise on Google Services assets through performance or brand advertising. Performance advertising generate revenues mainly on Google Search, YouTube, and Google Network Members (i.e., AdSense, AdMob, and Google Ad Manager ads found on non-Google websites) assets whenever a user engages with a company’s text-based ads. Brand advertising brings awareness to a company’s products and services through video, text, images, and other interactive ads.

Alphabet uses its infrastructure, security, data management, AI, and analytics capabilities to provide an array of cloud services. Google Cloud includes Google Cloud Platform (“GCP”) and Google Workspace (formerly known as “G Suite”) for the modern enterprise. Alphabet’s own products run on GCP and allow developers to build, host, and launch their own applications on the same infrastructure as some of the largest Alphabet products. Google Workspace provides Gmail, Docs, Drive, Calendar, Meet, and several other products – which are totally free to the individual user, as you may know – for a fee to organizations requiring larger-scale collaboration tools. Google Cloud generates fees from both GCP and Google Workspace.

Other Bets include “long-term bets” in futuristic ventures outside of Alphabet’s core products and services. Most of these bets are in their early stages of development, but make the future worth looking forward to. Waymo (self-driving vehicle technology), Nest (smart home devices), Google Ventures or GV (venture capital arm), and Verily (life sciences research) are a few examples of the areas Alphabet considers will experience asymmetric upside. Other bets operate as individual companies, essentially as start-ups with a start-up environment under the umbrella of Alphabet.

Alphabet arguably is one of the best businesses on the planet with a wide moat from competitors. Google Search, Google Play, YouTube, and Google advertising tools facilitated approximately $426 billion of total economic activity for over 2 million American organizations. Google effectively controls the global search engine market – it captured over 85% market share of search engines every period since 2010 and currently holds 87% of the market. Similarly, YouTube controls almost the entire video streaming market at 74% market share.

Additionally, Alphabet tapped into almost 30% of the US digital advertising market in 2020, compared to Facebook, the next largest player in the digital advertising, who captured just north of 25%. GCP is an exciting business for Alphabet in the IAAS and PAAS space as companies continue to move to the cloud – Alphabet currently holds a 10% share in the combined IAAS / PAAS market.

Alphabet continues to grow at above-average rates. Total revenues, EBITDA, and free cash flows are growing at rates you would certainly not expect from a company this enormous.

Just as Microsoft holds together the entire global economy with duct tape via Excel, Google is the source of the bulk of modern humanity’s collective knowledge and a regular word in the dictionary.

The Google search engine is a classic example of a service that brings together consumers and businesses and meets their independent needs. Consumers can search on the largest search engine in the world to obtain high quality searches and answers to just about any question.

Businesses, on the other hand, can leverage this enormous pool of users and Google’s data tools to advertise effectively in front of billions of eyeballs every day, month, and year. 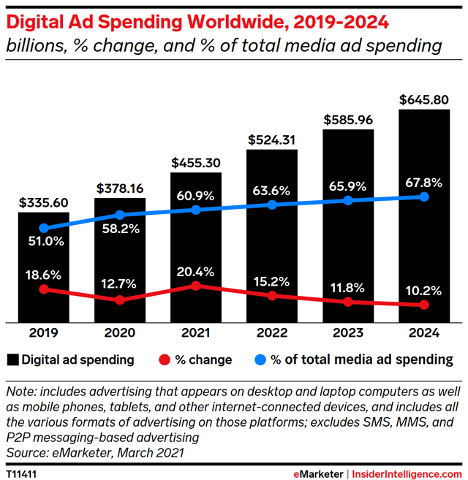 Digital advertising held up exceptionally well despite the pandemic negatively impacting broad advertising spend. Digital ad spend increased 13% year-over-year between 2019-20 and eMarketer expects this trend is far from over. We believe Alphabet will be one of the largest beneficiaries of this trend and the share price should follow suit as investors realize digital ad spend is less cyclical than originally thought in our new digitalizing world.

YouTube controls most of the online video streaming market and continues to defy the law of large numbers.

YouTube ad revenue grew over 30% each year in recent years. Growth in direct response and brand advertising spend increased drastically as businesses realized they need to continue getting ads in front of more eyeballs even when consumer spending is weak and uncertainty around the pandemic looms. 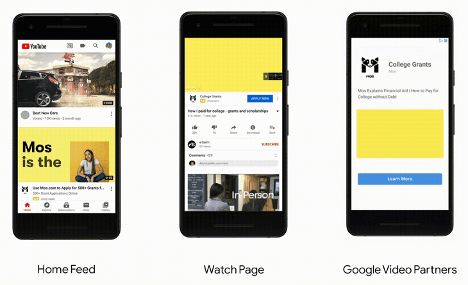 YouTube continues to experience viewer growth and it is now, in fact, reaching more 18 to 49-year-olds than all linear TV networks combined. On top of this, advertiser effectiveness is increasing, watch time is increasing, and advertisers can reach young audiences that they cannot in other media.

Outside of advertising, YouTube Premium and YouTube TV are gaining ground. The former has about 30 million subscribers and the latter has just over 3 million subscribers. Albeit small, these non-ad revenue sources provide Alphabet with tons of vertical optionality as digital media usage increases and consumers shift away from linear TV sources.

YouTube is already a large part of our lives and it seems it will only increase as viewers seek on-demand and play-from-anywhere services for music, videos, shows, live content, and movies. We believe Alphabet’s investments in YouTube will open tons of vertical opportunities in streaming and ecommerce to generate cash throughout this decade.

AWS and Microsoft Azure are GCP’s two largest competitors and have benefitted in the past decade from first-mover advantage while GCP performance lagged due to lack of management focus. This trend took a turn in January 2019 when Thomas Kurian took the helm at GCP as CEO.

Kurian is a 22-year veteran who oversaw Oracle’s product and software development, as well as the introduction of Oracle’s Cloud Services.

GCP embarked a new approach upon Kurian’s arrival – provide support for traditional enterprise workloads, allow customers to leverage Alphabet’s assets for their own benefit, and use a full “go-to-market” plan with channel partners.

GCP’s main value proposition lies in what Alphabet already does best – artificial intelligence, machine learning, real-time data and analytics, and software development. GCP will continue to be unprofitable for the foreseeable future as it invests heavily into its product stack, data platform offerings, go-to-market strategy, and new regions. Alphabet provides these bundled cloud services for a reasonable price, a cherry on top for a service stemming from one of the world’s largest data collectors. These services should unlock tremendous amounts of opportunities through the 2020s – GCP will aid companies become more efficient and optimize costs as they move to the cloud, then help these businesses digitize their operations from head to toe.

The Google Cloud Platform, along with Google Workspace which continues to deliver and enable hybrid work solutions in a digitizing world, has been growing vastly (53% and 47% YoY in 2019 and 2020, respectively) and will continue to do so for years to come.

Alphabet’s creators once said, “Google is not a conventional company. We do not intend to become one.” Alphabet is not afraid to venture out into the unknown and pave its own path and we believe the “other bets” segment exemplifies the out-of-the-box thinking inherent in the company.

Waymo is making promising moves in the self-driving vehicle realm, where its first fully autonomous ride-hailing service was launched in Phoenix, AZ. DeepMind is accelerating progress in biological research – its AI system, AlphaFold, was independently recognized in 2020 as a solution to the “protein folding problem”, which contributes to many diseases. Verily is also finding its way into our daily lives with its COVID-19 Testing Program expanding access to screening and testing and the COVID-19 Pathfinder automating frontline support for healthcare services.

These bets are currently unprofitable, but we believe these ventures are future areas that could provide tremendous upside to society and Alphabet shareholders.

A company like Alphabet, despite its size and place in our lives, does not come without risks. We believe the following areas present the main risks to Alphabet’s business and share price today:

Alphabet is arguably the stickiest business in the world with billions of users interacting with one or more of its services each day.

The world is becoming more digital, and Alphabet is on the forefront of this transformation.

Vast amounts of data and traffic on its search engine will drive advertisers to advertise on Alphabet services. YouTube is experiencing massive growth and more upside appears to be imminent as Alphabet realizes vertical opportunities in video, music, content, and ecommerce.

Alphabet’s world-leading AI and ML capabilities should drive growth in its cloud business for many years. Alphabet is the ultimate network that connects consumers and business by helping both groups obtain independent value from Google services.