Intuitive’s robotic-assisted surgery (“RAS”) system, the da Vinci, allows surgeons to perform minimally invasive surgeries that result in better outcomes for patients and shorten recovery times from surgery. The da Vinci can be found in thousands of hospitals worldwide as the system is considered the gold standard of RAS systems. We think Intuitive’s valuation factors in its moat and although not a screaming buy, we think Intuitive will perform well over the long run.

Intuitive is a company that pioneered and leads the robotic-assisted surgical technology and solutions industry. It is primarily focused on enabling hospitals to provide minimally invasive care and surgical procedures to its patients. The company offers the following products and solutions to its customers, who are mainly hospitals and other healthcare facilities:

Da Vinci Surgical System – a robotic surgical system designed to perform minimally invasive procedures. It is controlled by a surgeon from a console viewing a 3D, high-definition image of the surgical field and facilitates surgical performance like open surgery but without the natural, undesired movements surgeons make.

Informatics – a suite of products and services, including Intuitive Cloud (the software on which most Intuitive systems run and through which proactive monitoring and software updates are performed), SimNow (a cloud-enabled simulation platform on which surgeons can learn and practice their da Vinci surgical skills), and Iris (an augmented reality imaging product used for kidney procedures).

Instruments and Accessories – a portfolio of four groups of products: Da Vinci Instruments, Da Vinci Stapling, Da Vinci Energy, and Accessory Products. Most of these products provide limited use. The “Extended Use Program” was introduced by Intuitive in 2020 to provide 12 to 18 uses on certain instruments versus the standard 10 uses prior instruments were able to handle.

Ion Endoluminal System – a flexible, robotic-assisted, catheter-like platform designed to navigate through micro passageways in the lungs for biopsies.

Intuitive started its journey in 1995, the year the company was founded. The first ten years of existence was marked by an adventure into the unknown.

The Intuitive team knew they were on the brink of a revolution in the medical world. In 2000, the first da Vinci system was launched after the FDA approving the system for general laparoscopic surgery. 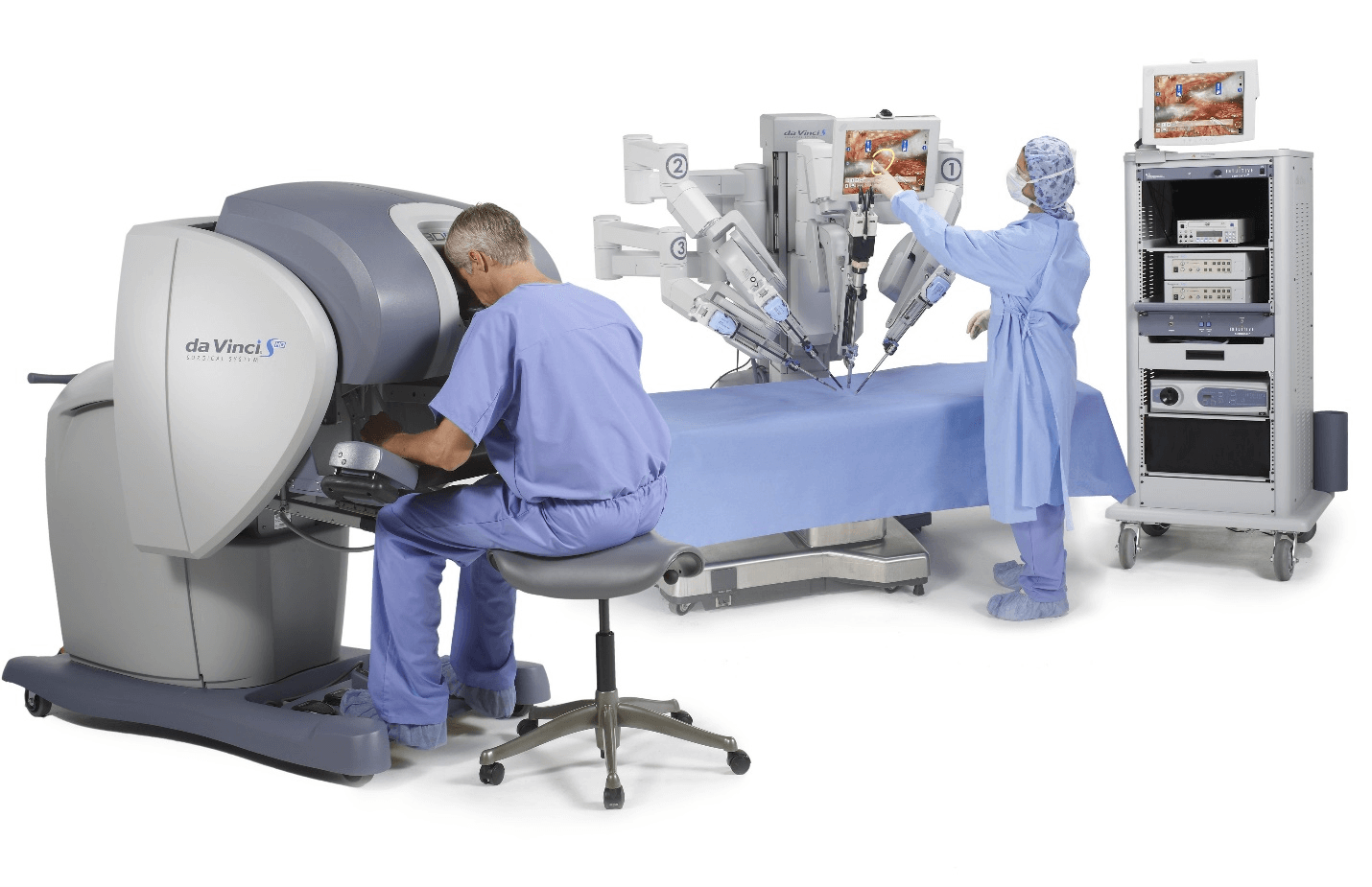 Throughout the next decade, Intuitive entered the world stage with approvals across many countries and its new and improved second-generation platform. With continued momentum, Intuitive continues to innovate, launching the third and fourth generation of da Vinci systems and the Ion endoluminal system.

Intuitive is a leader in the robotic surgical system field and this could be attributed to their relentless focus on their “quadruple aim”:

Most of Intuitive’s revenues are recurring, supported by instruments and accessories sales, services, and operating lease arrangements with customers.

The company continues to grow rapidly. Although Intuitive faced some financial pressure in 2020 due to COVID-19 and the resulting delays of many elective surgeries, sales and income nonetheless increased at high double-digit rates.

One of the most obvious competitive advantages of Intuitive is the switching costs associated with the da Vinci system. Hospitals spend anywhere from $500,000 to $2.5 million ($1.5 million on average) on the da Vinci system, a large initial capital outlay, especially when hospitals must adhere to a strict budget.

The price tag is not all – each user must face a steep and long learning curve to get accustomed to the product in simulations and patients. For instance, SimNow training systems logged 34,000 hours of training in over 431,000 tasks in 2020. Hospitals face a massive disincentive to train doctors on competing products given the enormous financial and time resources dedicated to retrofitting a hospital with new robotic surgical systems.

The high switching costs of Intuitive’s products and services are a result of first-mover advantage and the monopolistic position Intuitive enjoys as an early entrant into robotics.

Intuitive has established and continues to maintain a high reputation in the medical world given the da Vinci track record and countless studies performed - the da Vinci systems have been on the market for over two decades with over 24,000 peer-reviewed journals published over that period. Intuitive has built a strong, prestigious, and recognizable brand with over 80% market share in robotic surgical systems, nearly controlling the entire global market.

A strong brand and reputation help Intuitive benefit from network effects. The global installed base of da Vinci systems sits at over 6,000 units today.

For further context, over 41,000 surgeons are trained on da Vinci systems and over 8.5 million surgical procedures have been completed using them. Swaths of information exist on the benefits, current and potential use cases, and studies of the da Vinci systems.

Doctors can access these resources to improve outcomes for patients and leverage da Vinci-trained peers to find new ways to use and benefit from the systems. Ultimately, Intuitive benefits substantially from creating a “community” of global surgeons that trust its products – doctors find new ways to use the system, thus expanding the potential use cases of the da Vinci systems, leading to more sales as the systems become more compelling for hospitals to purchase despite the high price tag.

The value of da Vinci systems increases over time. We believe this is one of Intuitive’s greatest strengths and will help with the adoption of future innovation from the company.

Intuitive sports a bulletproof balance sheet, a competitive advantage in and of itself. The company is one of the most liquid we have seen. It holds so much cash and ultra-liquid, short-term investments in excess of debt and leases, it can cover every single one of its liabilities at a moment’s notice without putting a dent into its bank account.

We believe Intuitive is best positioned in the market to engage in a variety of competitive practices in the case that competitors flood the market with new robotic surgical systems.

Intuitive would be able to better absorb price cuts, continue offering lease arrangements to customers (highly popular in principle according to JP Morgan research), and conduct R&D at many magnitudes greater than competitors.

Intuitive should continue to dominate the robotic surgical system market and, in fact, we would be encouraged to see management raise debt to lower Intuitive’s weighted-average cost of capital (WACC), expand value creation (defined as the spread between ROIC and WACC), and invest more aggressively into its operations to maintain the number one position.

Nonetheless, this strong balance sheet will enable Intuitive to undertake share repurchases in opportune times, invest heavily into R&D, and conduct opportunistic and / or accretive M&A, even at its current state. 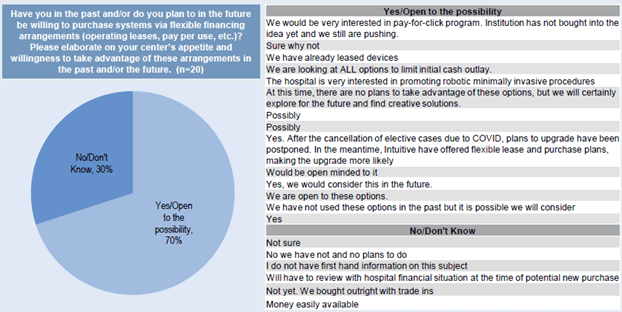 This leads to the final main competitive advantage Intuitive benefits from – barriers to entry. Intuitive has ownership or exclusive field-of-use licenses for over 4,000 US and foreign patents related to its products and another 2,000 patents in various regions are pending. Surgical systems and the introduction of them into the market are strictly overseen by the FDA, various levels of government in the US, and all other countries in which Intuitive operates. It is unlikely any of these regulatory bodies would approve a product inferior in quality or probability of satisfactory patient outcomes given the da Vinci systems have been around for over 20 years, constantly improve with each new generation released, and currently are the gold standard amongst doctors.

Da Vinci systems have been around for a few decades, but the market is far from mature. Growth is expected to continue for the industry as a whole and we believe Intuitive will continue to lead the pack by fending off competitors with its strong moat. Total global sales for RAS (robotic assisted surgery) systems, instruments and accessories, and services – all of which are provided by Intuitive – are expected to hit almost $10 billion in 2023, a total increase of about $4 billion since 2020, a 17% over the 3-year period.

Our assumptions above are generally in line with Intuitive’s figures. Intuitive is locked and loaded on 6 million targeted procedures across certain regions with existing products and necessary clearances.

Over a longer timeline, Intuitive sees the ability to provide solutions for over 20 million soft-tissue procedures each year.

Since Intuitive makes most of its money from instrument and accessory sales, increasing the amounts of procedures performed on the da Vinci should drive most of Intuitive's growth. This has been the trend for a long time and we expect it to rise for a while as the medical field finds new use cases for elective minimally invasive surgeries.

Although the da Vinci systems are the core products of Intuitive’s “razor and blade” business model, a large portion of revenue is generated beyond the systems themselves.

One major product development to watch is Intuitive’s Ion endoluminal system, a minimally invasive lung biopsy platform enabling robotic-assisted bronchoscopy. Released in 2019, Ion can further drive R&D into new pre- and post-operative care systems, instruments, and devices if it proves to be successful. Intuitive can leverage its strong reputation in the minimally invasive RAS system space to introduce other products and services that could enhance patient outcomes through proactive and post-surgery care. The result would be an ecosystem, or a suite of various bundled products and services, in which a sale of the da Vinci system would entail a plethora of other revenue sources for Intuitive.

Management at Intuitive is keen – when CEO Gary Guthart was asked about future opportunities, the following areas were highlighted:

These statements, albeit broad, indicate that Intuitive is willing to invest in novel ideas and outside-the-box thinking. “Digital surgery” can be found lower on the S-Curve and certain competitors are marketing their efforts as such. Gary Guthart was asked about these efforts and responded by noting that Intuitive has long been investing in new technologies, such as artificial intelligence, technological advancements, and improved connectivity.

Intuitive is not worried about the S-Curve. Instead, it embraces it. Intuitive launched Intuitive Ventures, a $100 million fund that will invest in “future leaders of minimally invasive care”. Focusing specifically on digital tools, precision diagnostics focal therapeutics, and platform technologies, Intuitive will support independent initiatives in and around minimally invasive medical care to drive developments on the lower, left-hand side of the S-Curve. 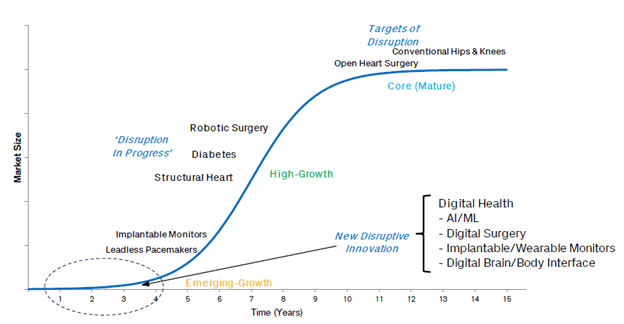 Intuitive is aware of the optionality at its fingertips. Investments in these areas of the market present exceptional opportunities for the business to grow and showcase the deep commitment Intuitive has towards driving innovation.

We view the following points as potential risk areas that could threaten Intuitive’s near-monopoly in the robotic surgery market:

Despite these risks, we believe these risks are manageable. Intuitive has a strong balance sheet with no debt that will allow it to power through economic turbulence. Its products have also been around for decades, rendering it unlikely that regulators would view the product unfavourably given its success.

Lastly, competitor’s products have yet to hit the market – Intuitive will continue to sell to hospitals in the meantime and build its reputation amongst a larger customer base. We do not believe competitors would be able to completely break the trajectory and momentum of the da Vinci systems but rather fill niche areas of the market that Intuitive is not focused on.

Intuitive Surgical’s opportunities for growth have been served on a golden platter, but it did not come easy. It took the company over two decades to establish its position, reputation, and brand name in the medical world. Today, the company has a deep moat and a bulletproof balance sheet and no debt.

The benefits of this are twofold:

Intuitive should remain in the number one position as a robotics-assisted surgical systems provider with a long runway in its current state and eventually more as it exercises its optionality in the near and distant future.