Match Group – a holding company of 25 online dating platforms – ignites the beginning of about 60% of relationships that began on a dating site or app. We believe Match Group is attractive for its leading position in the online dating world and the clear network effects it hosts on its ecosystem of apps. We also think the company is well-run but lacks long-term optionality with its current portfolio.

Match Group is a company focused on dating, managing 25 different platforms, some of the most common ones being Tinder, match.com, Plenty of Fish, and Hinge. Every platform has its own features and customer sets attracting different user personas.

Users can create profiles of themselves, attaching photos, hobbies, and interests. This profile is then shown to anyone that meets filtered criteria. Users are given the opportunity to either say they like the person or skip and move onto the next person. If two people like each other, it is shown as a match and the pair can begin messaging each other.

Across all the apps, the company is available in over 50 countries. Match Group’s business model is broken down into two segments:

Their business is based on a freemium model. When users sign up, they can access limited features with periodic ads. For a fee, users can upgrade to a premium status, eliminating ads and unlocking more features.

Users are able to sign up and integrate other social media apps into their profile, reducing friction and increasing conversion rates.

For subscriptions, Match Group offers premium features across all dating apps to give users an enhanced searching experience. Based on a specific tier, a user can find more matches with others, message others before a match, and even see if users liked their profile. Subscriptions vary in price per tier and are set to a recurring fee, either monthly or yearly.

For the advertisement segment, Match Group runs ads for basic users. Periodically after viewing a few profiles, users are prompted with ads. These ads can be removed if the user upgrades to a higher tier through subscriptions.

The History of Match Group

The origin of Match Group came from Stanford Business School graduate, Gary Kremen. In 1995, Kreman wanted to make a platform to help older professionals look for long term relationships. He ended up making the website Match.com.

After trying to get investors on board, Gary Kremen ended up leaving Match.com a year later due to lack of interest and was bought out by IAC in 1999 for $6 million. They ended up revitalizing the company and turned it into one of the most successful online dating sites in 2000.

The company had slow periods of growth and management changes throughout the early 2000s, until 2009 when chairman Barry Diller, split up IAC into 5 different companies. This was the start of Match Group.

In 2012, Match Group brought forth their own platform called Tinder. This took the online dating industry by storm as it started producing record numbers in users and revenue.

To date, Tinder is the top grossing mobile app worldwide across all categories.

The Rise of Online Dating

Before the age of technology, dating was done through means of physical meets - Singles nights, speed dating and mutual friends.

Through the rise of technology, many people found the simplicity and comfort of sitting at home and connecting with others nearby. Through their creative user interfaces and user experiences, dating apps became the go to for finding a new partner as the apps themselves are very sticky and addicting. In 2020, the dating app industry generated $3.1 billion with nearly 200 million active users.

As the years progress and platforms continue to refine their products, online dating will continue to attract more users and grow as an industry.

We believe online dating is here to stay.

To be a market leader, there must be a competitive advantage that a company has to offer.

What gives Match Group an upper hand against all of its competitors is its sheer market share dominance and network effects that come from that.

Of the 7 largest dating platforms by user base, Match Group owns 4 of them.

This is in addition to the niches that Match Group tries to target with its portfolio of platforms.

While covering a wide variety of demographics, Match Group continues to grow their individual platforms to obtain this market dominance.

There is an added advantage of network effects when using these apps. In order for a dating app to be successful, an adequate number of users need to be on the platform for singles to look and match for others.

This is in Match Group’s favour as these network effects help the company scale with their user base. The more people on the platform is not only better for the company, but also for other users as well as it gives them a better experience looking for a match.

Across all of Match Group’s apps, they all run on the same model. Users are initially on a freemium status, which means they can use the application with limited features and periodic ads. This gives them a sense of how the app works with little to no friction.

For a recurring fee, users can upgrade to a premium status for additional features and no ads. For some platforms, such as Tinder, users can select from multiple tiers, each having a specific set of capabilities.

Match Group has been able to capitalize on their freemium model as their subscriber count continues to grow year over year.

Created in 2012, Tinder popularized the idea of a gamified dating app. Before its time, dating apps were plain and did not have any defining features. You would set up a profile and just connect with people nearby.

What Tinder did well was create a dating app with a cohesive user experience. They introduced the idea of “swiping”, which many apps took inspiration on. If you liked a profile, you could swipe right to accept, and to move on, you swipe left. This made the user experience on Tinder seamless and of course, addicting.

On average, Tinder users login 11 times a day, spending 7-9 minutes per session, for a total of 90 minutes per day.

This sticky platform is what has allowed the online dating industry to skyrocket. Tinder holds the title of the top grossing app worldwide while also being the most downloaded dating app. 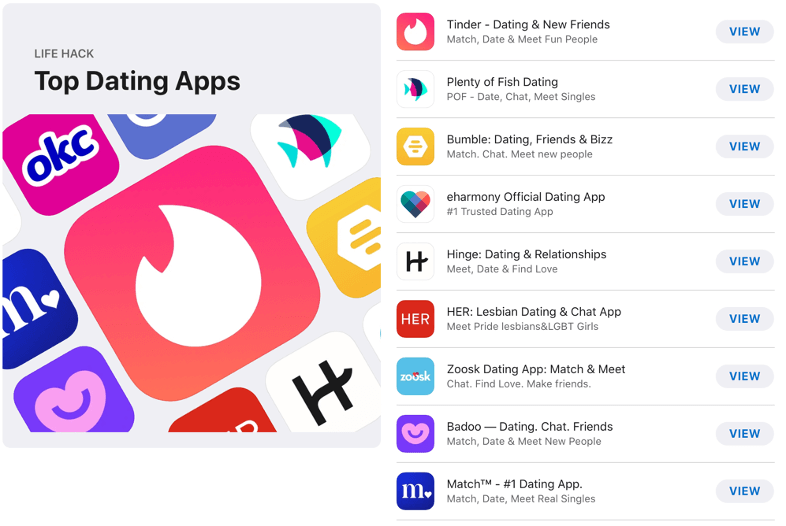 Hinge is an online dating app that was created in 2012.

The platform uses questionnaires to link like-minded profiles together.

If both parties like each other, it is a match, and they can begin talking. What makes Hinge stand out is their slogan, “Designed to be deleted”, referencing the idea that their business model works and that you can find a partner.

Match Group purchased half of Hinge in 2018 and the remaining stake in 2019. 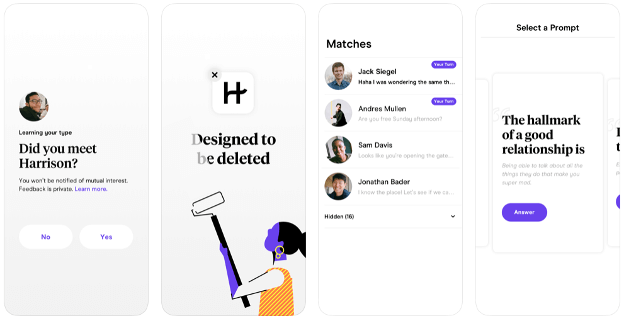 Running an already successful company, Match Group took its proven strategies with Tinder and Plenty of Fish and applied them to Hinge, to help bolster their already staggering growth. They improved the marketing of the app, offering it as a counterpart to Tinder, as most people see Tinder as a casual relationship app, while Hinge is catered more towards serious long-term relationships.

Match Group helped skyrocket Hinge’s user base as they are the fastest growing dating app in the industry. 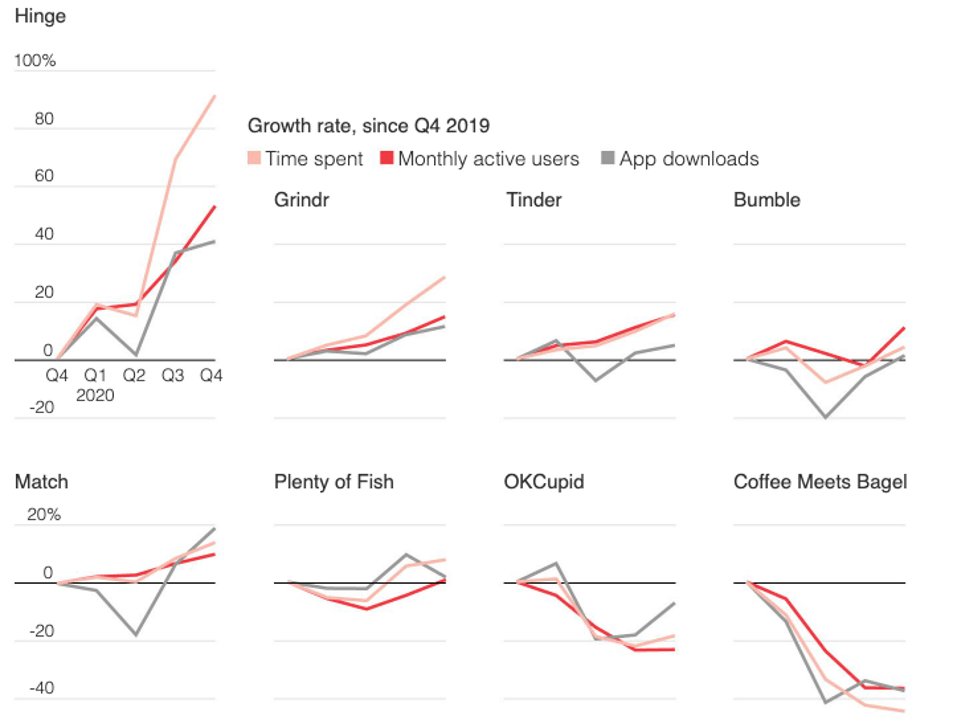 Based on the biggest platforms in the industry, Hinge holds a remarkable status in its outstanding growth.

Match Group was able to take Hinge’s already successful business model and use its resources to make the platform even stronger. Their strategy of buying out companies and improving them with more money and resources helps to generate organic growth.

One concern with Match Group is there being little to no switching costs involved. A consumer can easily switch between Tinder to a non-Match Group competitor, such as Bumble, without losing out on any features.

Despite that, what the company does well is have extremely high engagement rates. Tinder has a creative user experience that is addicting and can keep users on the platform for a long period of time. This helps to build stronger brand awareness and increased conversion rates as more time spent on the platform translates into more subscriptions.

A Lack of LTV (Lifetime Value)

For most apps, companies strive to keep churn low. The goal is to keep consumers on the platform, to generate more money.

For dating apps on the other hand, having high churn is a sign that the business model works. If two people connect with each other and get together, they have no more need for the app, thus deleting it. This poses the risk of a short Lifetime Value (LTV).

Hence, the Hinge slogan, Designed to be Deleted.

Despite being counter intuitive, it brings up the question what Match Group can do to lengthen a consumer’s LTV. Investors should be looking at Match Groups active users regularly, to see if there is a decline. That may be a sign that the business model works, but it may hurt the business long-term as subscribers account for 95% of company revenue.

The incentives for success are not aligned between the business and its user base.

This poses as a massive competitor to Match Group due to the network effects and optionality that Facebook carry with their brand. Facebook has nearly 3 billion monthly active users on their platform. Introducing a new feature allows the company to translate their pre-existing customers.The brand power and user base that Facebook carries can pose a huge threat to Match Group.

Investors should be paying attention to how Match Group positions their different platforms while also looking at market share.

As of right now, this is not a short term risk as Match has been able to keep growing in a competitive environment, but it is something to be aware of.

Match Group has popularized the idea of online dating through their robust and broad selection of applications, managing a portfolio of over 25 different platforms.

Match Group strives to provide dating apps for the different niches and filters that people look for in relationships. This is what gives them a competitive advantage as they own four out of the seven most popular dating apps worldwide. The network effects from having a growing user base is in both parties favours as more people on the app is in Match Group’s favour, but in addition gives users more opportunity to find matches.

In terms of their business model, Match Group generates majority of its revenue from subscriptions as all of their platforms run on an initial freemium status. This frictionless model has allowed Match Group to grow its subscriber base consistently.

The company’s strategy to buy out dating apps and revamp them for organic growth has a proven track record of success. Their acquisition of Hinge back in 2019 allowed the company to expand Hinge’s market presence, while also increasing their revenue.

Match Group should be aware of its lack of switching costs and lifetime value when looking at future growth. Users have little to no incentive to stay on a specific platform and can make the switch anytime.

Match Group will continue to provide exceptional dating platforms to its users, capitalizing on the growing online dating industry. Their freemium business model and engaging user experience keeps subscriber counts growing. They will continue to find new acquisitions and strategies to keep the business fresh and look for new ways to monetize the enormous user base.