Mercado Libre’s e-commerce empire continues to dominate South and Central America. These regions have tons of room to expand with significant underbanked populations. As such, Mercado will continue to grow at astonishing rates. We love the company today but unfortunately cannot get on board with the valuation fully. If buying shares today, we would look to hold for no less than five years.

Mercado Libre is a company focused on providing E-Commerce and FinTech solutions to Latin Americans. What makes this company so special is their versatility and optionality within secular trends in the region. The company operates under 2 different sectors and 6 different business units:

These units are intended to provide as much coverage to consumers as possible. From a marketplace to make purchases, to software to build your own marketplace, Mercado Libre enables ecommerce. 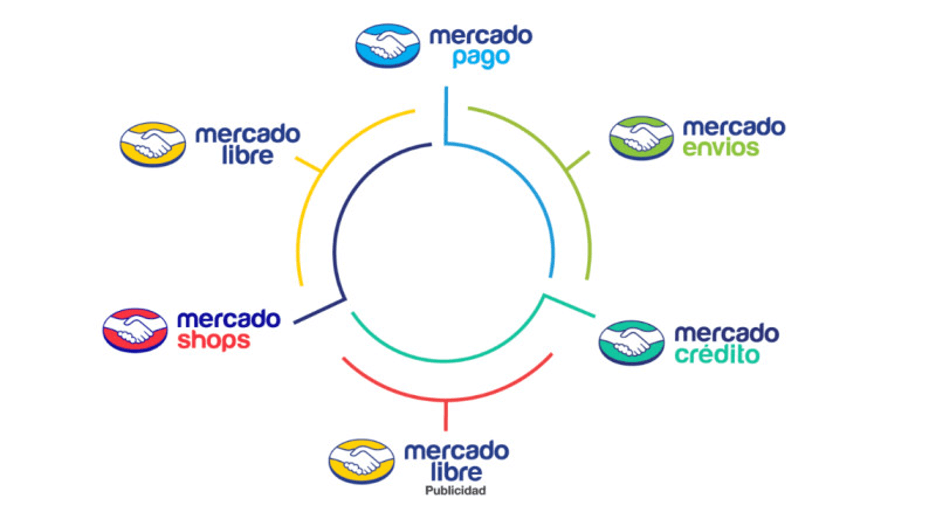 In 1999, Marcos Galperin, a Stanford alumni, had an idea to help the growing demand for Spanish and Portuguese goods. So, out of a garage in Buenos Aires, he created the now known Mercado Libre Marketplace. This platform took inspiration from eBay, being an auction-type platform.

After initial success in Argentina, it expanded to other countries across Latin America, such as Brazil.

In 2001, eBay purchased 19.5% of the company to help the business expand even further to more and more countries. Meanwhile, eBay was also able to expand its own business, giving Latin American sellers the opportunity to sell on its platform.

By 2006, Mercado Libre took the continent by storm, being the largest online marketplace platform in Latin America, generating nearly $52 million in revenue. The company then went public under ticker MELI, being the first Latin American technology company to be listed on the NASDAQ.

Since the introduction of Mercado Libre Marketplace, the company has expanded its business model into a variety of functions, supplying all kinds of demand in the E-Commerce world.

Mercado Pago, Mercado Libre’s payment service, was not meant to be a part of the company’s main business model. The goal initially was to focus on marketplaces and bolster the E-Commerce sector. In 2007 though, the company introduced a service called Mercado Pago.

This was a payment service to help complement Mercado Libre Marketplace, by giving consumers a seamless experience when buying products on the platform.

The introduction of the service was very successful as nearly a third of Marketplace orders were done through Pago.

Through the platform, users can send and receive money, if both parties have the platform. Consumers realized that the receiver didn’t have to be a seller.

The app could technically be used as a Person-2-Person platform. Especially for countries where access to banking was hard, this was a great alternative.

Total Payment Volume (TPV) started growing from “Off-Platform” transactions. With the positive tailwinds, Mercado Libre introduced mobile point of sales (mPOS) to small businesses in Brazil. The mPOS were very successful, and so the company started expanding to more countries, such as Argentina and Mexico.

About 50% of Mercado Pago’s revenue comes from these mPOS.

Despite not being the intention of the business, Mercado Pago provided a dire solution to those in Latin America. This service was really a bolt out of the blue, helping to further strengthen the position of Mercado Libre.

The emphasis on Mercado Libre is their strong position in Latin America. Their two segments of E-Commerce and Fintech ensure the company can provide a plethora of services to almost anyone across Latin America.

The company’s competitors such as PagSeguro, a payment company, or FLEXE, a logistics company, run their businesses in a specific country. Mercado Libre on the other hand, reaches customers all across the continent.

This outreach helps to bring in more customers, but also solidifies the company’s brand and optionality. Consumers are more inclined to use Mercado Libre’s products over competitors because of how familiar they are with the brand, whether they are current or new products on the market.

In addition, Mercado Envios is what helps the company build a moat around their services. Opening up a shipping/logistics service for Mercado Libre Marketplace sellers, helps to monopolize the E-Commerce market in Mercado Libre’s favour.

Instead of relying on outside services to distribute goods, sellers can store and ship products using the company’s service. This has proven very beneficial as nearly 80% of products on Marketplace are shipped through Envios.

Since the cost to open a logistic facility is very expensive up front, competitors are disincentivized to try and compete. Thus, as a company, Mercado Libre controls everything in the production line, from the platform and marketplace, up to the shipping services. Mercado Libre is building a strong moat in Latin America.

Mercado Libre is a dominant force when it comes to the E-Commerce world, but their diverse business model may be too much to handle.

Every one of their services has its own set of competitors. Mercado Pago is up against PayPal and PagSeguro, Marketplace is up against OLX and Amazon, and Mercado Envios is up against FLEXE.

Despite leading the industry, the question is for how long? As the company continues to expand its business, they may not put enough attention into specific services, which could allow for competitors to easily come in and take market share.

On the flip side, with the company’s influence and brand name, they could still be successful in bringing in new products to the market. Investors should be aware of how each service in the business is performing individually, to evaluate the long-term success of the company.

Investors should also be aware of the geographical climate of Latin America when evaluating the future growth of the company. Countries like Argentina have a very unstable currency along with rising inflation rates. Both combined could affect operating costs for the business.

Mercado Libre is building a strong foothold in E-Commerce and payments. Leading the marketplace with its platform and logistics service, along with successfully integrating Mercado Pago into society, this company builds a strong moat to ensure it dominates.

The company’s optionality allows every service offered to be relevant and in demand for consumers to use. Mercado Libre can continue to utilize their optionality in secular trends that emerge in Latin America.

Their evolving business model, along with the progressive growth of the online service industry will allow Mercado Libre to continue to build its E-Commerce empire.