Shopify is a beast of a company with a share price that has undoubtedly followed. Insane or not, the growth opportunity is still massive today. However, the company’s valuation is at nosebleed levels. While we think Shopify is an incredible founder-led growth story, we are cautious with the valuation as the stock hits new all-time highs.

Shopify is becoming a center piece of building ecommerce all around the world. Their broad business model allows them to provide services to any kind of business, whether it be local shops, or even large-scale corporations. The company’s revenue structure is broken down into two different segments:

Subscription solutions are fees related to Shopify’s online store plans. Business owners have the option to choose from four plans, varying in features and price, to suit their specific needs. Every plan has a monthly fee, which attributes to the subscription solutions segment.

The second segment comes from merchant solutions. This portion of revenue stems from three different sources: transaction fees from sites, shipping and financing services, and Point of Sale (POS) hardware. For every purchase on a Shopify site, the company takes a small percentage of the total. For shipping and financing services, Shopify provides services for business owners to ship their products to customers. Finally, along with supporting businesses online, Shopify also provides hardware-based solutions with POS devices to conduct business in person.

Before Shopify began its reign as the ecommerce king, the company started out by selling snowboards.

In 2006, two Canadians, Tobias Lütke and Scott Lake, wanted to sell snowboarding equipment online, so they opened an online store called Snowdevil. Now the issue was that Lütke did not like the functionality of the existing ecommerce platform that the store was built on. He wanted more versatility. So, with his programming knowledge, he created his own ecommerce platform and built Snowdevil’s online store. A few months later, the duo launched the ecommerce platform under the name Jaded Pixel in June 2006. This then went on to become the now known multi-billion-dollar company, Shopify.

As the years progressed, Shopify started introducing more and more features to its online stores, while gaining more traction in the ecommerce industry.

2010: Store owners could now use an iOS application to track and manage their store

2013: Introduction to Shopify Payments, allowing merchants to accept credit cards on their online store. In addition, POS hardware was introduced to in-person stores to allow businesses to accept both debit and credit cards.

2017: Partnership with Amazon to allow merchants to sell products on Amazon through Shopify Stores

2019: Opened up a Fulfilment Network to sort out logistics and shipping services for online merchants to use

The Rise of Ecommerce

Tobias Lütke and Scott Lake revolutionized the way entrepreneurs approached online business. Before Shopify, ecommerce was not as popular, and selections were limited. Through this software and technology, it is easier than ever to open an online store, gain traction through social media, and get paid in sales.

This is because of how quickly the ecommerce industry has grown in the last decade. In 2021, the Total Addressable Market has reached nearly $153 billion. It will continue to gain more popularity especially due to COVID-19. Consumers can sit in the comfort of their home and shop for all their needs, with the click of a button.

This influx in traction has given Shopify the edge as many users have shifted to online stores to keep their businesses running with the pandemic. The company continues to gain ecommerce market share with more merchants joining the platform by the month. 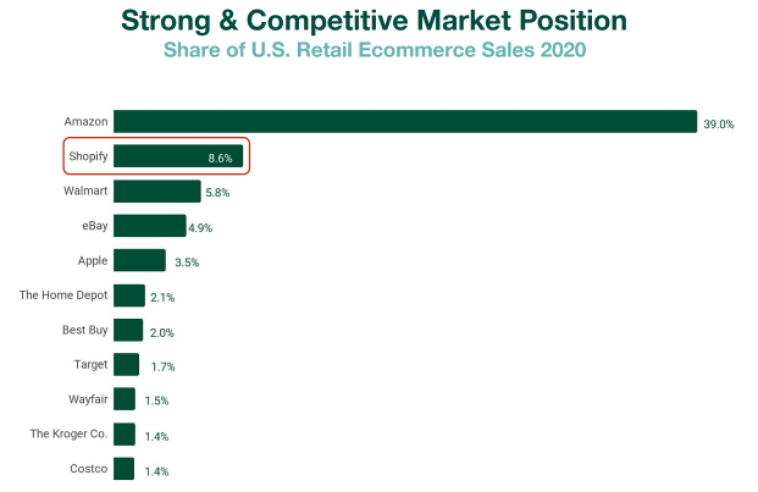 Shopify’s core business is in their online store builder. Whether it be a business owner, a new entrepreneur, or even a large-scale corporation, the company has packages dedicated to each kind of business. Each plan has a monthly recurring fee along with percentage fees per transaction. 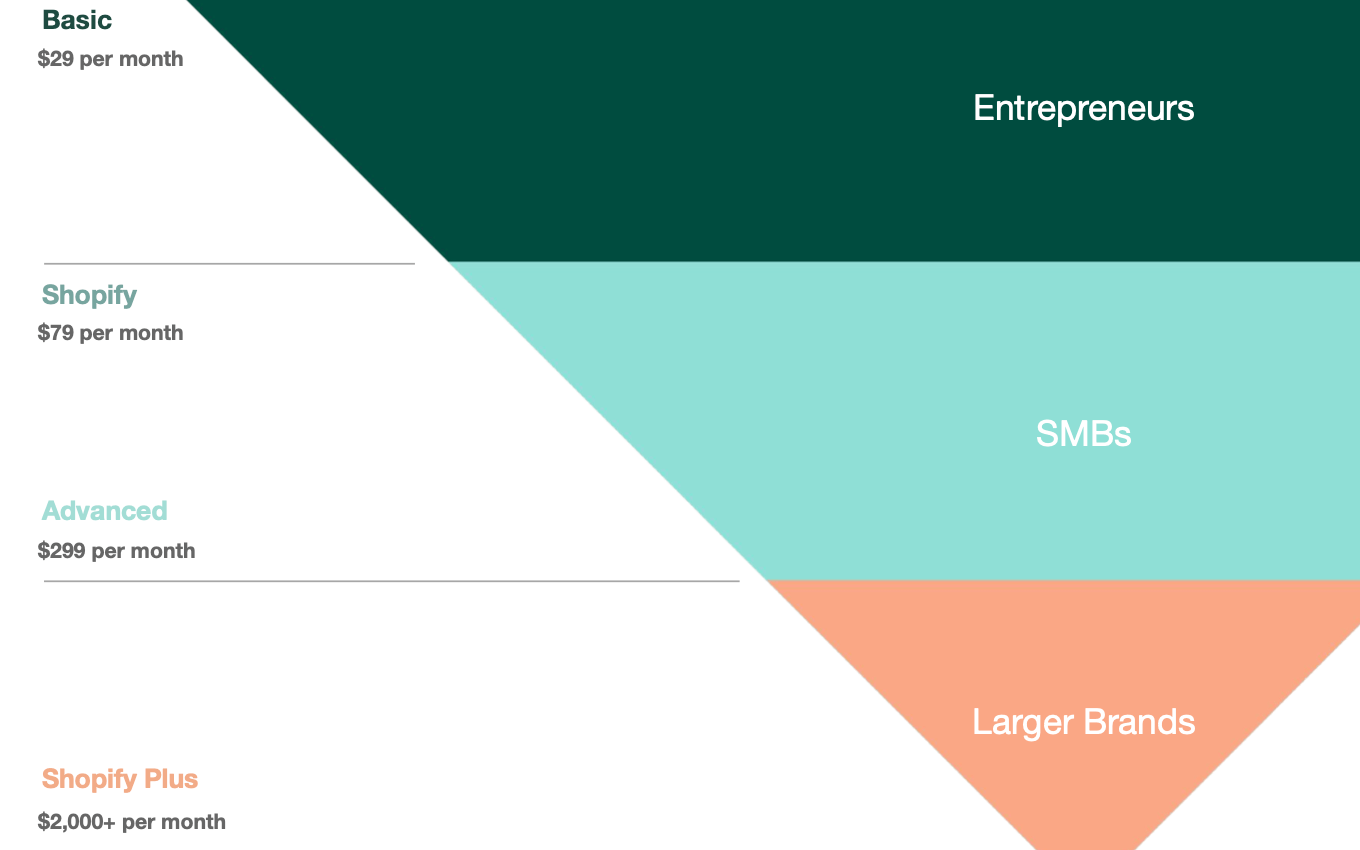 What allows Shopify to grow so quickly in monthly merchants is the vast services available on top of the base packages. Business owners can generate invoices and refund policies, ship through Shopify’s shipping service, and even create company logos, all from one place. Having a platform to access all your needs as a business owner is crucial. Shopify’s ability to capture mind share from new entrepreneurs trying open up a business is what allows them to perform so well.

The company’s Monthly Recurring Revenue (MRR) growth in the subscription solution segment, is driven by the increased active merchants on the platform. As more businesses use Shopify, total recurring revenue increases. It has been evident how well Shopify is bringing in new merchants as subscription solution revenue continues to grow by the quarter. 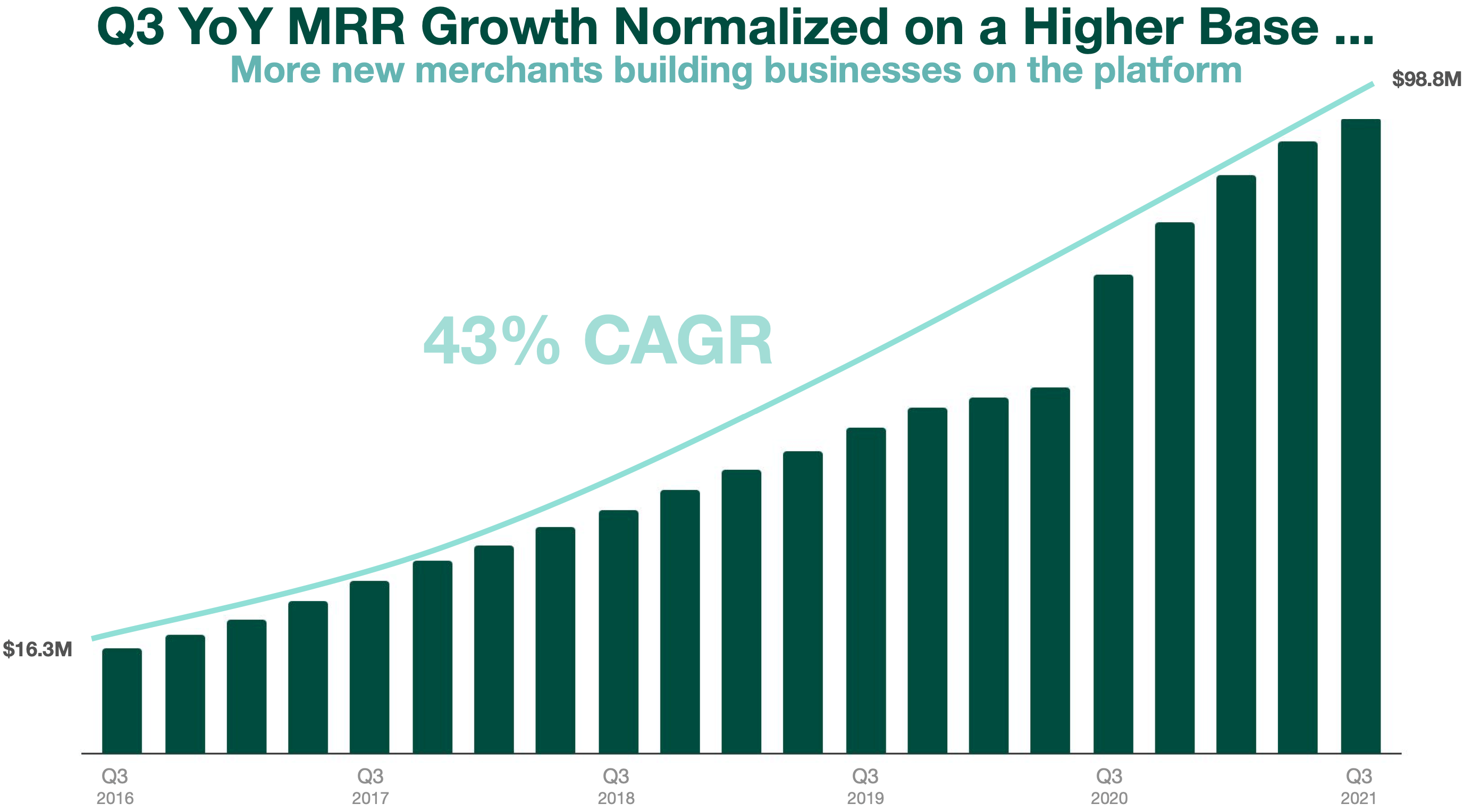 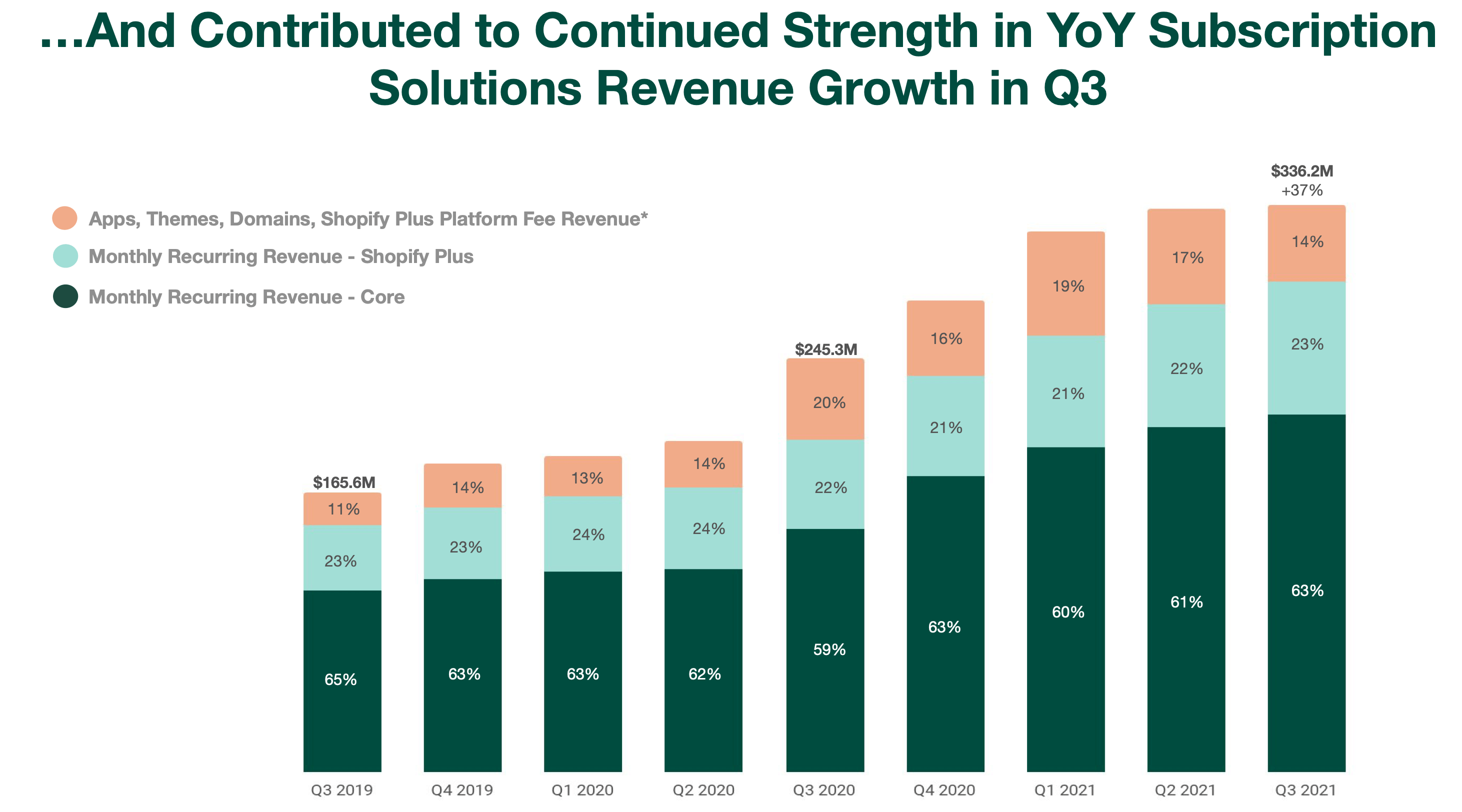 This segment of the company is to help streamline the payment process for all businesses, whether it be online or in-person. For online stores, owners have the option to use Shopify Payments as a payment network. Using the company’s software gives businesses the ability to pay no extra charges; they are only required to pay the transaction fee attached with their subscription plan. 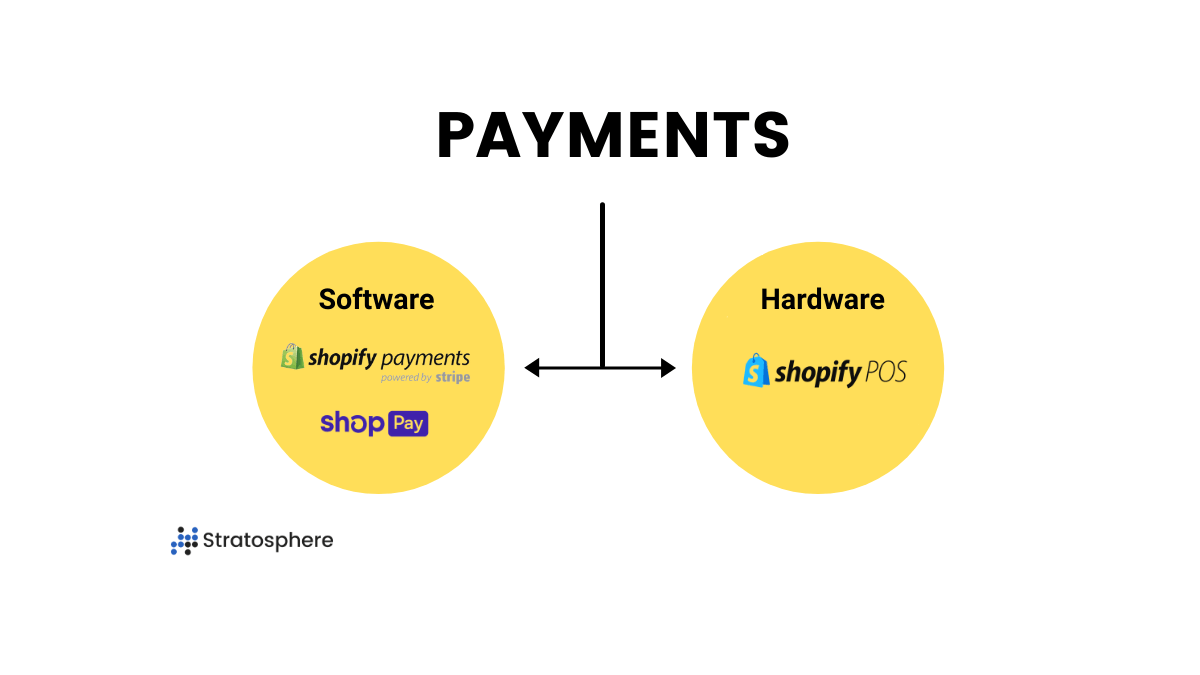 If a business decides to use another payment network, such as PayPal, users are required to pay anywhere from 0.5%-2%, depending on their subscription plan. As a plus, users have an interactive dashboard through Shopify Payments to track their transactions along with total sales.

Perhaps it speaks to how great Stripe is. Perhaps there is an opportunity to expand margins if Shopify builds the solution in-house. 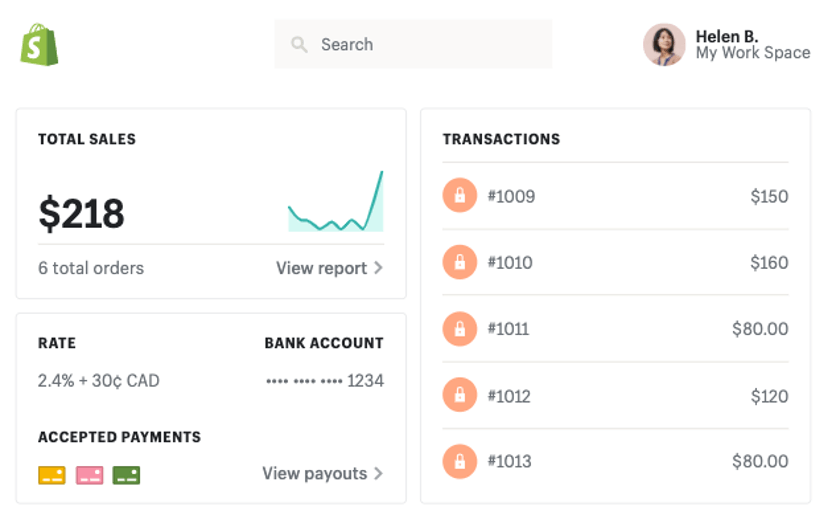 To expand on their online payment network even further, Shopify introduced an ad-on called Shop Pay. This software is intended to make checkout fast and secure for the consumer, all through an email address.  Shopify recently partnered with Facebook to create Facebook Shops. It is a tool that users can use on Facebook and Instagram to open online shops through social media, while checking out through Shop Pay. This partnership was intended to help the company to expand its outreach even further and allow any business to access commerce, regardless of platform. 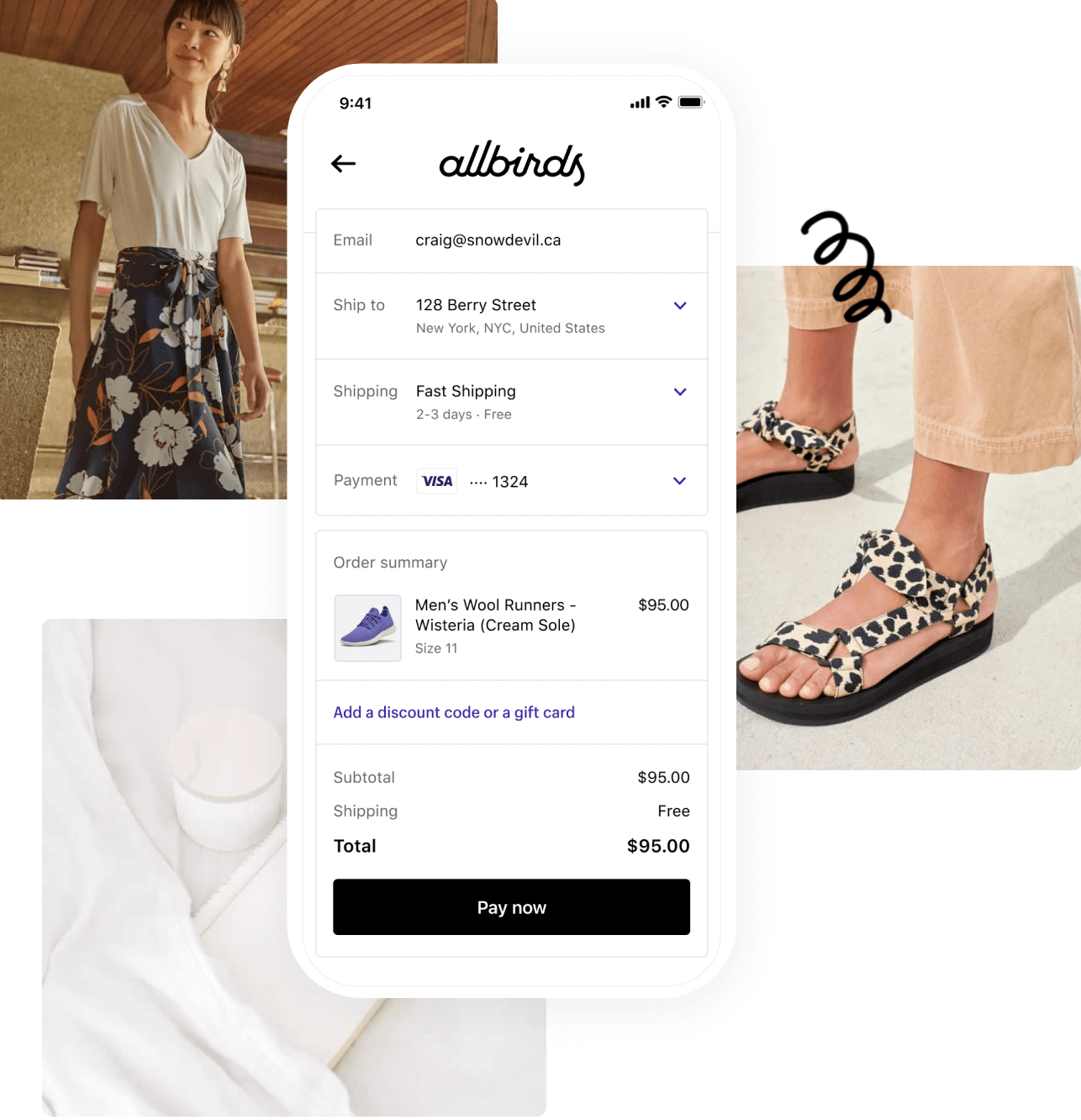 This strategy of encouraging the use of Shopify Payments and Shop Pay, allows Shopify to have more optionality when bringing in new products to their users. Since business owners are more familiar with the brand, they are more inclined to use Shopify products in the future through their ecosystem. 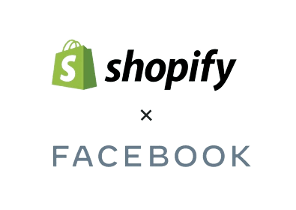 Aside from the software that Shopify has built, they also offer Point of Sale (POS) solutions for in-person stores. These devices include iPads and chip readers to help customers with ordering and checkout.

What makes the POS system so great is that it is a part of the Shopify payment ecosystem. All transactions go through Shopify Payments and business owners get the same perks as those with online stores, with transaction history and sales tracking.

In terms of pricing, hardware is purchased separately, in addition to a monthly fee based on your original Shopify plan. These pricing strategies continue to emphasize the idea of building an ecommerce platform while helping to drive Shopify’s revenues with consistent and growing recurring revenue.

A Look at Operating Leverage

For a company like Shopify, revenue will continue to grow while the costs associated with those sales will not increase proportionately.

This is key for the company specifically, as they plan to have major expansions in the upcoming years. With the ability to generate more cash, Shopify can focus on their growth in the Fulfillment Network. The company plans on making acquisitions to expand their logistics/shipping network, to expand its outreach to more customers. 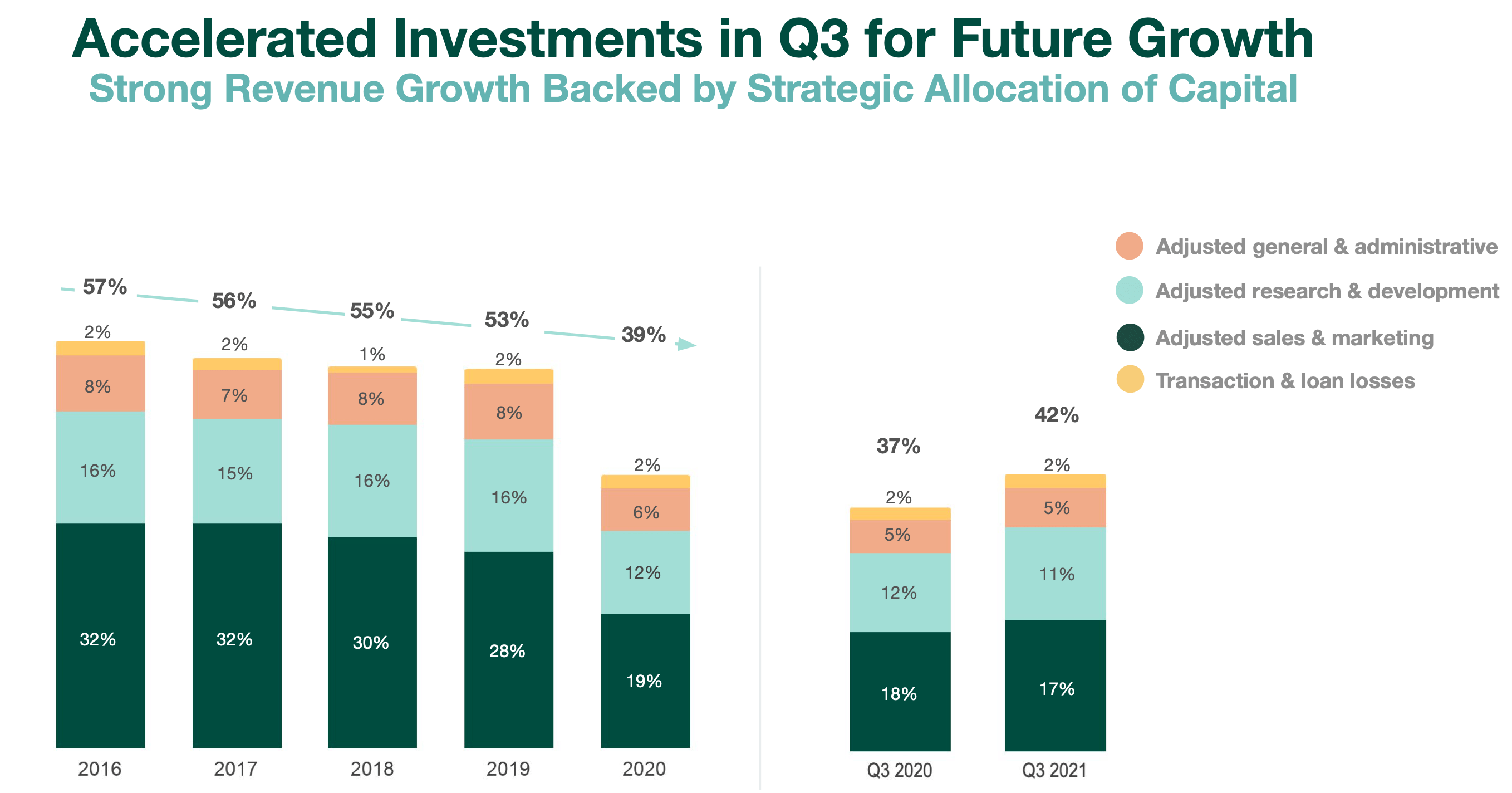 Many Shopify shop owners have brought up the concern that there is very limited creativity when it comes to building online stores. There are a set number of themes users can access to build their site, but as the years progress, many businesses will start to have similar looking online stores. This is an issue as brand recognition is vital for a successful online business.

Despite having the ability to purchase Shopify Plus, the utmost premier Shopify service, not all business owners can afford the service. With a $153 billion total addressable market in small medium sized businesses, Shopify should be looking towards finding new ways to allow businesses to keep their brand unique and creative.

Despite Shopify being a leader in this market and having a dominant market share, there are still other competitors that may pose a threat to the company, such as Wix, SquareSpace, and BigCommerce. With Shopify having a very broad business model, serving all kinds of customers, some competitors cater their services to specific target markets such as small businesses (Wix) or fast-growing businesses (BigCommerce). This could pose a threat to Shopify if they are not able to provide the best services to all segments of their target market accordingly. Shopify should strive to distinguish themselves as the best ecommerce store builder, in order to be appealing to more consumers.

Perhaps more opportunity than risk, but with every transaction made, Stripe takes a small portion of the total for allowing Shopify to run on its payment network. The issue is that as Shopify’s Total Payment Volume (TPV) continues to grow, that small percentage will make a larger portion of revenues, which may be troublesome in the future. Shopify should look to creating their own payment network, to capitalize on the entire transaction instead of a portion, in order to increase their margins and top line revenues.

Investors should be weary if Shopify’s growth was pulled forward in the last year when evaluating the company. Due to COVID-19, many businesses have turned to Shopify to convert business into online sales. The question may arise, will this growth continue at the same rate. We believe that although growth was pulled forward, it is an overall accelerant for the business with sustained tailwinds.

Lastly, the business trades at extremely expensive valuation multiples and multiple compression is a risk to returns moving forward.

Shopify has taken a significant market share in the ecommerce industry by providing small to medium sized businesses the tools to create a powerful online presence.

Their two segments of subscription and merchant solutions allow for strong recurring revenue, diversified revenue streams, and an emphasis on optionality. The entire business model is built around a commerce ecosystem, where the products complement each other. This strategy is what keeps attracting business owners to Shopify while keeping churn low. 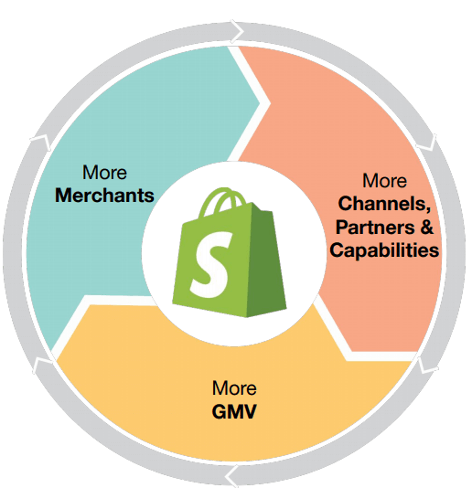 The combination of secular growth in ecommerce and Shopify’s execution by a founder-led management team has driven substantial growth. As they focus on expanding their business, Shopify will continue own a large mind share in ecommerce. To sustain growth, the company should continue to grow their Total Addressable Market (TAM), flex optionality and win key partnerships as the ecommerce platform of choice.