Spotify is an audio beast, plain and simple. Spotify is the place where the world’s best creators upload their content to be enjoyed by millions of listeners worldwide. We think Spotify today is extremely attractive. The powerful network effects from the massive global listener, artist, and creator base will only enhance the variety and quality of content uploaded onto Spotify.

Spotify transformed the way people listen and access to everyday music and podcasts.

Being the front runner of “access-based” services from the traditional “transaction-based” models, gave the company the edge on dominating the music distribution industry. Their strategy? Introducing subscriptions to stream music.

As a service, Spotify provides users access to millions of songs and podcasts. Initially, users are put on a freemium status, or the ability to have limited access to content with frequent ads between listening titles. For a monthly fee, users can attain a “Premium” status, being able to seamlessly listen without ads.

The company also introduced the idea of paying royalties to artists instead of fixed price tags. Spotify compensates labels according to how many streams an artist contributed to the overall streams in a year.

The Story of the Misheard

Daniel Ek and Martin Lorentzon were both successful Swedish entrepreneurs when they met in 2005. Ek was the CTO of Stardoll, a fashion-based video game company, and Lorentzon was the co-founder of Tradedoubler, a digital marketing company.

One day while trying to browse Ek’s home theatre computer for media, the duo found it troublesome and awkward. So, they built a solution themselves. This was the beginning of the now know multibillion dollar company Spotify.

Now you may think, where does the name Spotify come from. Turns out, it was actually misheard.

While Lorentzon was shouting random idea names to Ek, they took the words “spot” and “identify” to make Spotify.

Since the start of their company in 2006, Spotify has grown tremendously as a business. They helped transition the music distribution industry into what it is today: streaming based services.

From partnering with Google Home to provide services through Smart Homes, to end of year “Spotify Wrapped” campaign, Spotify has a knack for getting their product in front of consumers.

Artists’ successes have also attributed to the growth of the company. In the last few years, individuals have taken the platform by storm hitting record numbers.

The World of Audio Streaming

What made Spotify special is their introduction to the idea of audio streaming. Before its time, the main way to access music was to purchase tracks on iTunes or walk down to your local shop to get CDs. With Spotify’s audio streaming platform, users could sit in the comfort of their home and have access to millions of songs, all for one price.

In addition to music streaming, Spotify helped shine a light into the world of podcasts. With over 300 million listeners around the world, Spotify provides services to encourage people to use the platform. They introduced a program called Spotify for Podcasters which allows users to share their libraries easier, along with a tool to help generate advertisements to embed in the podcast itself. 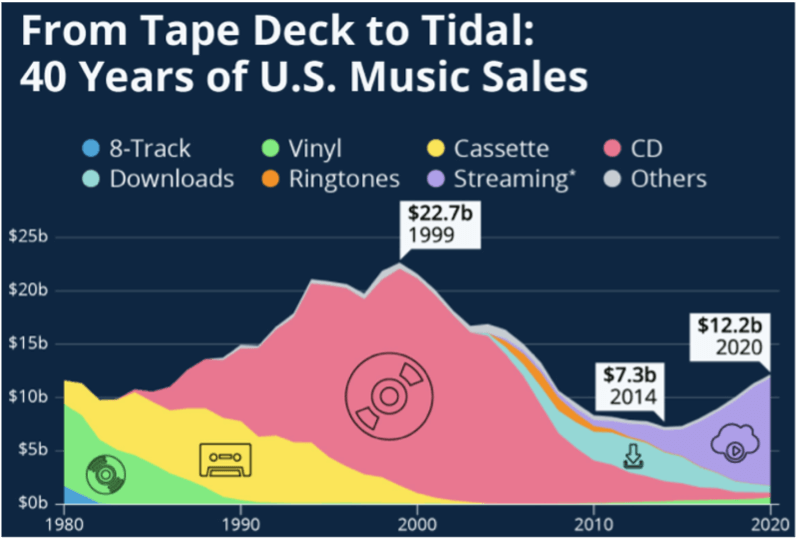 Their main goal is to try and encourage more and more people to use their platform for distribution.

In May 2020, Joe Rogan signed a deal with Spotify worth $100 million, to host his show, “The Joe Rogan Experience”, exclusively on Spotify.

Building a Community of Listeners

Spotify’s main stream of revenue comes from their monthly active users. Premium users can pay a monthly fee to gain access to a plethora of upgraded features.

Since it is a SaaS (software as a service) company, they opted for a freemium model. This is a strategy to give users a taste of how platform works with very little friction. This is not to be mistaken with a free trial, which has a time limit and then an obligation to purchase the premium product.

The freemium model is a strong way to gain customers’ trust and pique their interest. Spotify has used this model successfully by drawing in millions of new subscribers each quarter.

Spotify also has the highest conversion rate across SaaS companies, sitting at nearly 27%. Just to put into perspective, companies like Dropbox and Evernote have a 4% conversion rate.

How does Spotify grow their MAUs so quickly? By creating a community of listeners.

Spotify’s marketing structure is always striving for the idea of a community. Whether it be shared playlists with friends, seeing what your circle is listening to, or even purchasing a Family subscription plan, Spotify is always helping you build a community.

An Experience Catered to You

Aside from building a community, what helps bring in more MAUs every year is Spotify’s ability to make your listening experience about you. Their use of Artificial Intelligence helps to cater specific songs, podcasts, and ads to your liking. This is what keeps users on the platform, converting to premium, and keeping churn low.

Spotify took a new approach on ads in podcasts. Hosts now have the ability to insert dynamic ads, which are different for every user. Based on their preferences, every individual gets a different ad in that specific time slot, ensuring people get ads catered to them.

On top of the spot-on recommendations, the end of year Spotify Wrapped campaign is what puts the icing on the cake. The campaign helps users appreciate their music tastes, regardless of if they are a freemium or premium user. Statistically, daily average users (DAUs) increase by 20% every year when Wrapped comes out.

It is creative, fun, and even embarrassing experience to keep users engaged and wanting to come back.

(We know Nickelback was your top artist)

At the end of the day, this is the biggest reason why users join Spotify, convert to premium, and stay on the platform. You aren’t just paying for a bunch of music and podcasts; you are getting a service that appeals to who you are as a listener. 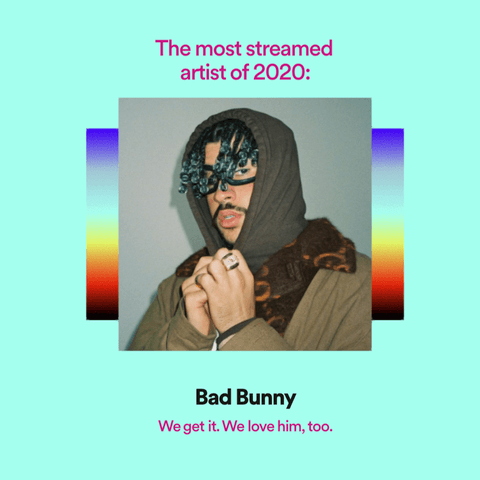 Perhaps the most exciting part about Spotify’s growth has yet to come.

As previously mentioned, Spotify is putting more and more resources into podcasts, with dynamic ads, and dealing with Joe Rogan. They also recently acquired 3 podcasting companies, Gimlet Media, Anchor, and Megaphone, for over $600 million. These acquisitions are intended to help the platform dominate the podcast market. Spotify now has the ability to make more profit off of ads, while having exclusive shows on their platform. 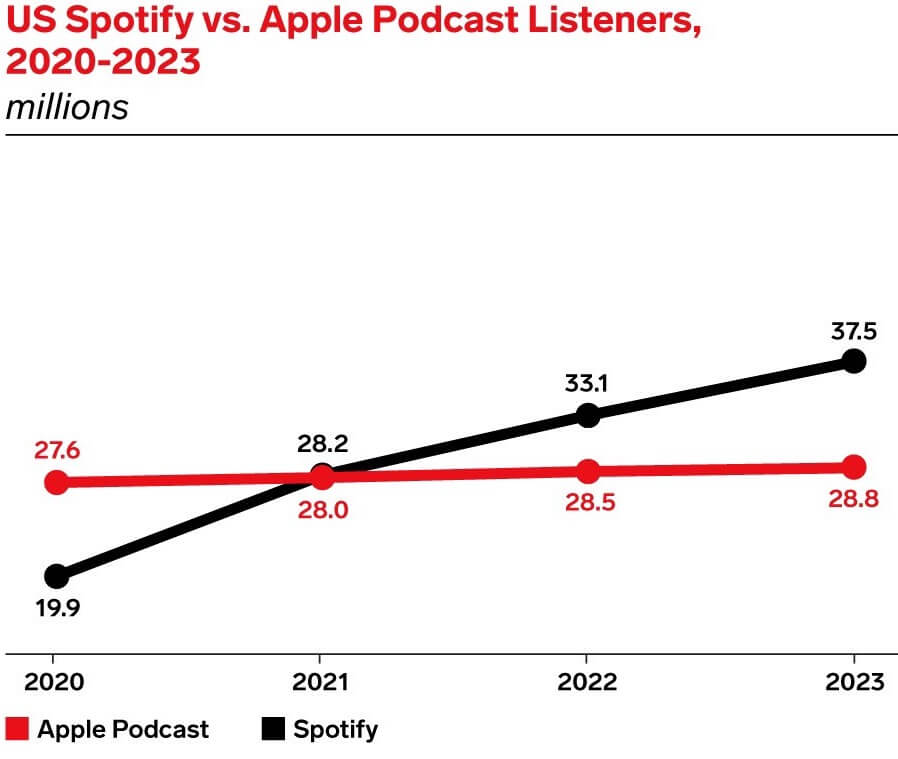 As Spotify continues to be more active in the podcast industry, they will be able to take down the current podcast baron: Apple. Since 2018, Spotify transformed the way people listen and access to everyday music and podcasts.

Spotify is trying to be the center piece of all things audio. They have revolutionized the music distribution scene in addition to popularize the idea of podcasts. From your favourite music to the podcasts you listen to while studying, Spotify has it all.

By the numbers, Spotify is growing tremendously, averaging 15 million more MAUs per quarter.

Their advancements in Artificial Intelligence are what make people come back for more. They cater sounds to you, and help you find new music that you would enjoy.

Spotify is just hitting the tip of the iceberg right now with audio streaming and advertisements. In the upcoming years, there is potential to delve into other markets such as concert and ticket distribution along with music production.

Despite not yet being profitable, investors should consider that Spotify is investing in the business to drive growth.

The biggest concern is to understand that Spotify’s cost of revenue, in paying royalties to labels and artists, accounted for nearly 75% of the company’s total revenue. This can be reflected in Spotify’s low gross margins for a software company.

Spotify has been an impressive growth in the music streaming business. Their future upside in gaining market share, domination in the podcast market, and emphasis on user experience is what will help put the company’s growth on repeat.