Tencent surely has amassed tons of “China risk” and we believe much of this, if not all of it, is reflected in the share price. This huge conglomerate has stakes in some of the world’s best companies and is growing at high rates across its social networking, video gaming, online advertising, cloud, and fintech operations. How many other companies out there perform so well on so many fronts?

Tencent is a technology company based out of China. Their portfolio of business units and investments span across various technology sectors such as communications, social media, and online gaming.

The company generates its revenue from:

Between their core offerings and the investment holdings, Tencent is a behemoth of a technology business with a powerful vision.

The Capital Allocator of China

Pony Ma and his four friends Zhang Zhidong, Xu Chenye, Chen Yidan, and Zeng Liqing decided to create their own company in November of 1998.

Their first product was an instant messaging service called OICQ. This application took China by storm, securing over one million users in its first year. Due to legal issues, the company had to change OICQ name to now known name QQ.

Despite QQ having success in terms of Monthly Active Users (MAUs), Tencent was yet to be profitable.

It was not until the company released another messaging application, this time for phones, called MobileQQ. Tencent was able to turn its first profit, generating $5.9 million.

Capitalizing on its mobile application momentum, Tencent created WeChat, an app that would change how society works in China.

Initially starting off as a messaging app, WeChat began to grow rapidly, and so Tencent started adding more features such as payment networks, online game centres, and even professional networking.

If it wasn't for Pony Ma's forward thinking skills and creative decision-making, the company may not be where it is today without him.

Here are a few examples of his stellar work:

Tencent currently has a complex ecosystem across its core revenue streams that dominate by a large margin. 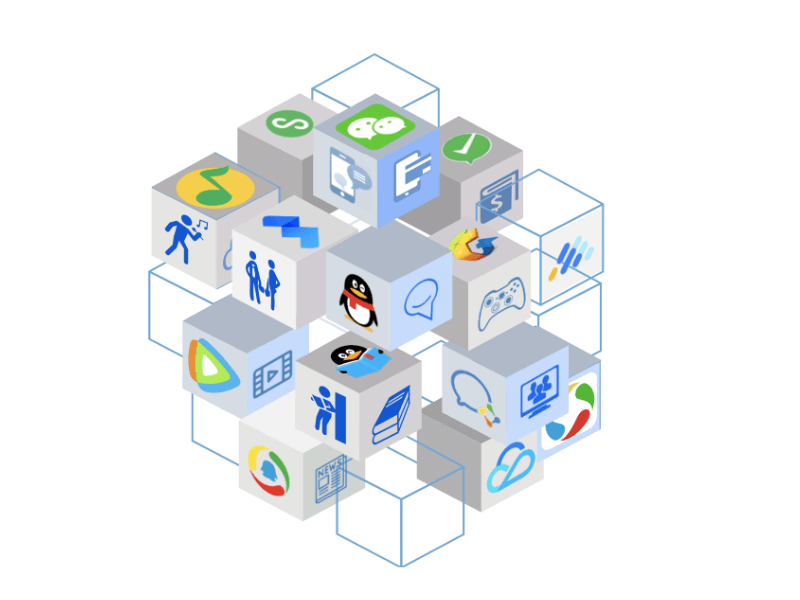 It is clear that Tencent’s dominance has created a profound lead and moat in their core offerings.

The ecosystem in gaming and social media is very sticky and core to how China interacts with the modern web.

This segment of the business splits up into two different units: Gaming and Social Networks.

The first part of Value Added Services comes from Gaming.

Tencent has had skin in the gaming industry for quite some time now and they are able to market extra add-ons to games to their growing user base.

Currently, the company owns 100% of Riot Games, creator of one of the most popular multiplayer games right now, League of Legends. They have an outstanding investment portfolio with stakes in over 15 different companies. The biggest ones include: Riot Games (League of Legends), Supercell (Clash of Clans), Miniclip (Indie Games), Epic Games (Fortnite), and more.

In addition, Tencent Games is the largest developer and operator of online games, allowing them to generate revenue from a variety of hit titles.

A few of their hit games include Honour of Kings, PUBG, QQ Speed Mobile, and Peacekeeper Elite.

Epic Games is also the developer of the Unreal Engine, a leading gaming engine.

For the company's platforms such as QQ, WeChat and QZone, users have the ability to enhance their instant messaging experience through dynamic stickers and extra features.

WeChat is known as one of the largest social media platforms on the planet, pulling in over a billion monthly active users per month. This is a massive advantage for Tencent as they have a much larger target market to appeal to.

To make it even better, Tencent owns 3 out of the 5 largest social networks in the world, alongside Facebook and WhatsApp. Having such a large market share allows Tencent to generate even more revenue from these added services.

This segment of the business splits up into two different units: Mobile Payment Services and Licaitong.

In terms of payments, Tencent has created a powerful network effect among its popular social networking apps by embedding in-house payment networks.

This feature allows users to not only chat with friends, but also gives them the ability to send and receive money from both friends and vendors.

In addition, Licaitong offers bonds, index funds, and a handful of other securities right in the platform.

Tencent's goal with Licaitong is to try to decentralize state banks, as they have been dominant for decades. They offer interest rates at near 16x state bank rates to try and encourage users to use their services to hold money.

Advertising is a big deal when it comes to China. With Tencent's outreach within the Chinese technology ecosystem, the company is able to generate revenue from a handful of different avenues.

Tencent is able to monetize its ads through its platforms such as Tencent Video and Tencent News. This helps with blockbuster media events such as FIFA World Cup broadcasts.

In addition, Tencent also generates revenue from its social platforms such as Weixin, Mini Programs, and other mobile advertising networks.

The numbers speak for themselves.

Social interaction through smart phones, cashless payments solutions and video games are a few secular trends that Tencent is heavily involved in and they are here to stay.

Tencent’s management headed up by co-founder Pony Ma has been a phenomenal capital allocator inside of high quality long term technology trends.

By the way, we love founder led businesses and Tencent is one of them.

Tencent has been able to generate these incredible numbers:

This is a big business.

To get an idea of how big Tencent really is, here is a graphic to show how some of their core business streams match up to some mega corporations in these secular growth trends.

This picture really does say a thousand words. 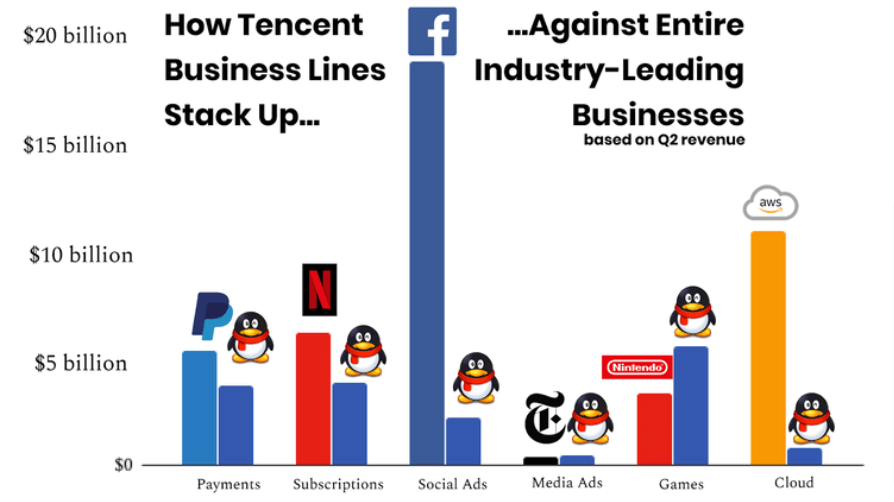 Source: Not Boring by Packy McCormick: Tencent The Ultimate Outsider

Tencent has been building an impressive holding corporation outside of the core business lines they operate.

Holding sizeable positions in growing technology plays around the globe, Tencent says they are able to leverage three main things: 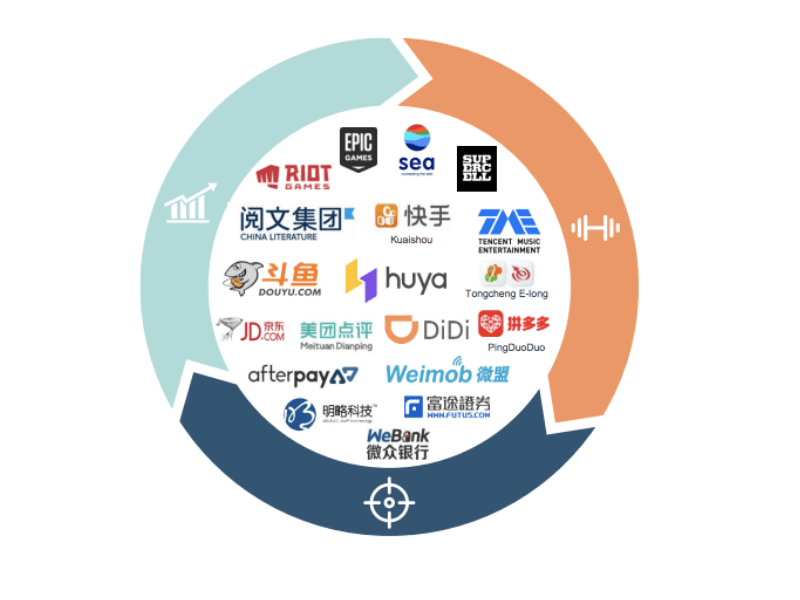 Tencent has investment in over 700 other companies.

The Government vs. Tencent

After reading this report, you may be thinking, Tencent has influence on practically everything that goes on in China. They manage the largest social media platforms, operate massive gaming companies, and essentially control payment networks. It brings up the question, isn't this monopolistic activity? What can't Tencent do?

The government has let Tencent become a behemoth.

Historically, when it comes to regulatory action, the government is far more lenient with Tencent than they are with other companies, such as Alibaba.

That is until recently, the government starting cracking down on Tencent's activities for being "too monopolistic" or perhaps just "too powerful?" Despite being contrary to their original statement of encouraging a monopoly, it has impacted the business heavily.

The Chinese Communist Party ("CCP") realized that Tencent is too big of a company to just shut down because of how strong of a business they have built.

In an attempt to bring down Tencent, the government is looking at the smaller details and trying to pick the business apart piece by piece.

Tencent was recently under scrutiny for not following antitrust laws and reporting M&A filings correctly. They are set to be fined over $1.54 billion.

The government also cracked down on Tencent for not complying with laws protecting minors on WeChat. The company set screen time limits on their gaming apps for users under a certain age to protect their privacy, but the CCP felt it was not enough.

This raft of regulatory scrutiny has heavily impacted Tencent's business as they are being hit by new fines and regulatory pressure much more frequently.

This founder led business has been incredibly at creating value for shareholders and expanding into secular trends with great optionality. Tencent is building an important moat in how people consume content and communicate.

Not to mention, their investment holding wing owns sizeable positions in some of the world’s greatest businesses that they can leverage by integrating them into their core offerings, capture emerging tech and create value for the business they are purchasing outright or taking a piece of.

This is a massive business in China with a strong moat and still has a long runway for growth.

The business Tencent's technology ecosystem has a wide moat on how China interacts with digital content and the internet through social media, gaming, advertising, cloud and fintech.

Tencent's regulatory risks are real as the Chinese government looks to shake up the technology landscape in the country quite aggressively. Even with these risks, we believe Tencent's valuation to be an attractive risk reward opportunity given the quality, durability and growth of the business.