Unity’s gaming engine is used by developers and industry professionals within and outside gaming to create interactive real-time 3D content. We think Unity could be one of the most important companies over the next few decades as the count of use cases for real-time 3D content shoots through the roof. Shares today are certainly not cheap, though. Proceed with caution.

The platform is mainly used by content creators to develop video games with other industries slowly beginning to embrace the 3D content creation world.

In terms of the business, Unity generates its revenue from three different segments:

The year is 2005 and Unity launched their gaming engine exclusively on Apple’s Mac OS X. This was a strange choice considering that Unity was written in C# which is a Microsoft programming language.

Regardless, Unity’s engine was extremely powerful about to hit the big time with what would happen next.

With the launch of the Apple App store in 2008, Unity was in a fantastic position to take advantage of grabbing almost all of the game development in the iOS ecosystem.

Fast forward to today, Unity has a significant market share in the whole gaming industry being in pretty much a duopoly with Tencent's Unreal Engine.

The Engine to Create, Build, Monetize Zero to 60

Unity provides a variety of tools and software for content creators and artists to create real-time 2D and 3D content.

ArtEngine and Granite are the main tools used for content creation.

These systems work together to create "ultra-realistic digital artwork" and depth of field graphics to give a truly immersive experience.

Unity has put in place specific Create Solutions tailored to these industries such as:

Operate Solutions is a suite of solutions provided by Unity to operate the content created using Unity’s Create Solutions, as well as external content outside of the Unity platform.

The set of tools provided allow subscribers to monetize their work through advertisements, maximize the lifetime value of end-users, optimize the cost of acquiring and engaging end users, and manage downtime needed to service games.

The ability to bring an idea to life on Unity Create Solutions and then monetize, gain users, use cloud delivery and analytics through Unity’s Operate Solutions provides a full turn key solution.

Not to mention that Unity’s game development life cycle is extremely fast compared to other gaming engines. It has this advantage over the Unreal Engine. That being said both engines serve their purpose and have pros and cons. The Unreal Engine from Epic Games (a Tencent company) is also incredibly powerful and has unmatched graphics.

Unity has a huge ecosystem of developers with tons of resources to reduce the learning curve and to build out games in virtual environments. 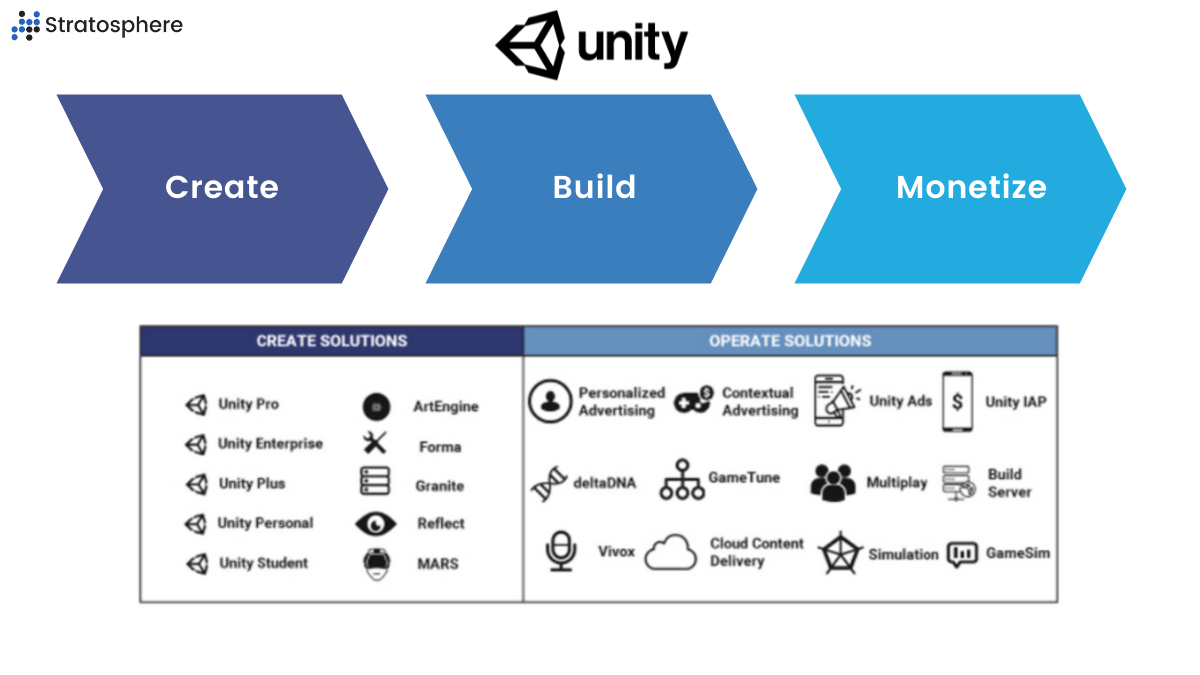 Not only is revenue recurring in nature with the SaaS (Software as a Service) model, customers are typically spending more on the platform every single year.

This is demonstrated in Unity’s monstrous 100%-plus Dollar-Based Net Expansion Rate.

Additionally, Unity is continually adding large customer accounts that spend more than $100,000 every year. The exciting part is that a decent chunk of them are in industries outside of gaming.

The Future of the Gaming Engine Extends Beyond Gamers

The most exciting upside about Unity may be the application of the gaming engine outside of gaming.

Gaming is a huge Total Addressable Market (TAM) to begin. The TAM if you include the potential in the following industry becomes gigantic: 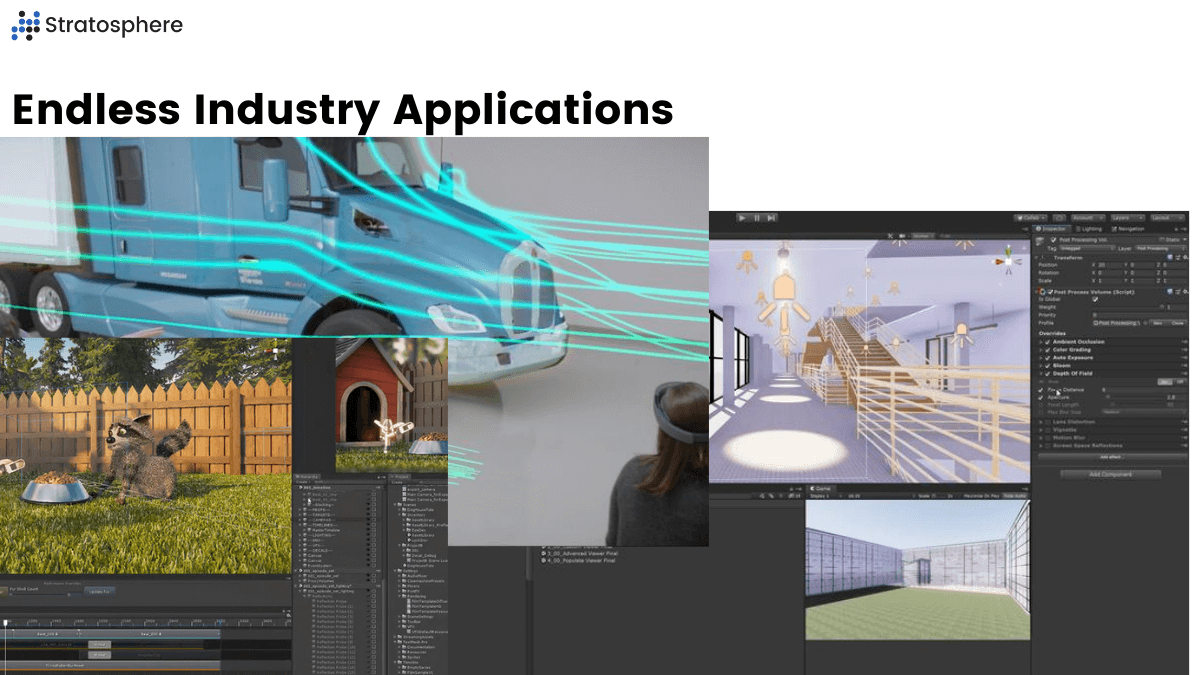 This is a clever move by Unity as it will allow the engine to penetrate a massive industry outside of gaming. Autodesk is well known among those in the Architecture, Engineering, and Construction (AEC) industry. Unity can use this brand power to their advantage and bring new solutions that consumers in other industries can use.

The Competition is Unreal

When it comes to competition, there is only one other gaming engine that stands in the way: Unreal Gaming Engine.

Looking at the industry as a whole, what makes these companies perform well is the moat they have created. The learning curve for both Unity and Unreal Gaming Engine is very steep. Developers take months to specialize in a specific engine due to their differences in programming and interface. This also means switching costs are higher.

Now it comes down to, which gaming engine is better? Why would a team prefer one over the other?

Unity, on the other hand, is programmed with C# and the engine is catered more towards mobile games. The engine dominates the mobile game industry, holding over 50% of market share. This is in comparison to Unreal Gaming Engine having little to none.

As mentioned before, both engines require a fair bit of expertise and months to master, but in terms of learning game development, Unity is more welcoming to newcomers.

As an organization, Unity has always been pushing to democratize game development, giving anyone the ability to create games given the right tools. This is what has allowed Unity to be the common choice for education environments and casual games.

From an entry point perspective, the Unity platform does a lot of work for the developer and locks certain aspects to ensure there are no catastrophic mistakes that could ruin the functionality of the game.

Unreal Gaming Engine on the other hand is much harder to master because of the more detailed programming language and technical skill needed.

In terms of development, since the engine uses open source code, every aspect is customizable. This is a much harder task for beginners but is needed when developers want full creative freedom.

Unity's engine runs on a freemium subscription model in which certain features are locked. You are required to pay more in order to unlock more features.

Unreal Gaming Engine, on the other hand, runs on a revenue share model. All features are unlocked and Unreal takes 5% of the game's revenue, regardless of how much is generated.

Unity can benefit from the tailwinds of both gaming and the industry applications outside of gaming.

The company has a significant market share in gaming and will continue to benefit from the growth of the industry. Unity’s revenue growth is impressive and we believe it to still be early innings of this growth story.

Unity has some impressive case studies demonstrating the success of various clients in and out of gaming.

Like many business to business (B2B) software companies, Unity has extremely sticky recurring revenues with high gross margins of 80%.

We believe the upside that both gaming engines owned by Unity and Unreal have huge total addressable markets with capabilities of being highly disruptive in industries such as architecture, engineering and construction (AEC), manufacturing, transportation, film and other virtual environments.