WSP is growing from all angles due to the demand for global infrastructure, its ability to conduct hundreds of lucrative acquisitions, and increase cross-selling opportunities with its expanding ecosystem while cash flows into the business. The company continues to execute well today and our thesis will likely be intact for as long as WSP continues on this trajectory.

As a consulting firm, WSP provides services related to engineering, design, planning and research for projects. WSP's projects can be broken down into six different divisions throughout four major regions.

The History of WSP

As time passed, GENIVAR expanded outside of Canada into the United Kingdom, acquiring a consulting company called WSP Global PLC. This acquisition helped the business expand worldwide, as the company already had 15,000 workers in over 300 offices worldwide. In January 2014, GENIVAR changed its name to WSP Global.

Throughout its expansion into the UK, WSP Global also entered other continents and countries such as Latin America and the Caribbean. To date, WSP Global operates out of 39 countries, with 500 offices and nearly 32,000 employees.

As WSP is already a company known worldwide, it plans to expand its business even further in order solidify its name as the leading global engineering firm. It all starts with building a strategic plan centered around its clients.

The three main pillars of this plan are people & culture, expertise, and operational excellence. The main emphasis for WSP is putting clients first. The company's ideology revolves around building and nurturing long lasting rapports that will carry on for decades and beyond. 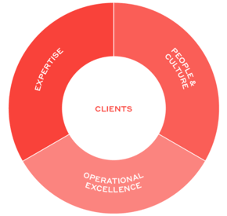 WSP also successfully fosters a competitive yet friendly work environment for employees. This helps ensure employees are inclined to help clients and help them succeed.

Being a large multinational company comes with clear advantages.

For one, employees can work in essentially any continent around the world. This level of flexibility is not granted at many companies. Second, WSP offers a plethora of competitive benefits that help employees will secure and valued.

WSP's expertise in the engineering space is unmatched. Once again, it comes down to its people. WSP hires lead engineers and consultants who are exceptional in their respective fields. Attracting and obtaining the best-of-the-best talent ensures WSP is able to take on the most complex projects while adhering to a high standard of quality.

This leads to the culminating factor to WSP’s success — operational excellence. A well-run company structure with high operational standards and industry-leading margins creates strong demand for its services. Customer demand, therefore, remains high and increased investments into such an environment create enormous value for the company and shareholders. This is where WSP is at today.

Engineering a Roll-Up. Get it?

Essentially, this type of business strategy is performed by one large company setting out to buy a large number of smaller companies in the same industry. These smaller companies are consolidated under one umbrella, generally the large holding company.

In this case, WSP would be the "large holding company" that seeks to acquire many smaller firms. 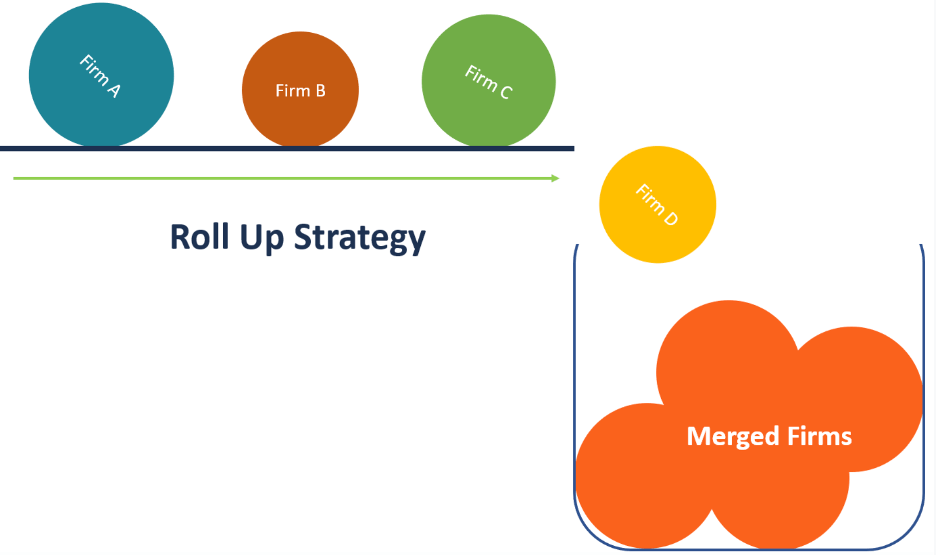 Benefits of the Strategy

One benefit of using the roll-up strategy is it allows companies to combine their assets and resources into one large pool. In WSP’s case, buying out smaller companies allows them to take over the previous companies’ resources, such as workers, products, services, customers, and use them for WSP’s benefit.

This helps to widen WSP’s scope of services as they are able to deliver on a greater variety of client needs, potentially including those in micro niches. It also enables the company to cross-sell other engineering services to existing customers. Prospective clients can also be upsold if, unbeknownst to the clients, WSP has more services than they had originally thought or approached WSP for.

The roll-up strategy also incurs lower production and operation costs while also increasing revenue. As WSP can buy out smaller companies, its cost of production will not increase much as it quickly realizes profit-boosting expense synergies through its efficient, systematic acquisition and integration process.

After all, each new acquisition is theoretically easier and smoother than the last, unless the newest acquisition has certain operational, financial, or regulatory nuances to it that management has not yet come across with previous acquisitions. This can then be used to generate more revenue.

Lastly, WSP can create value quite literally out of thin air. The engineering realm requires a ton of expertise and training, and so many of the largest global corporations and investment management companies stay away from acquiring these sorts of companies. WSP can roll up these niche engineering businesses under its name for a decent valuation multiple. Once integrated under the WSP name, those earnings are generally "re-rated" to WSP's public market valuation, creating value instantly. This is known as multiple arbitrage, a fascinating concept that we explore through several serial acquirers on Stratosphere.

From its roots, WSP Global has acquired an impressive number of companies to expand its business into many countries and industries. The company has acquired over 180 companies to get to the size and scope they deliver on today.

Acquiring such high volumes of companies within a fairly niche realm has several major advantages.

Using this strategy, WSP can expand its business drastically. The consolidated company has more capabilities and resources at hand to handle a larger scope of projects in more regions around the world, cross-sell various engineering services, and benefit from economies of scale. These factors increase the top line while also allowing for margin expansion.

This cycle can continue to help WSP acquire even more companies.

The most important part about acquiring these companies is to competition consolidation (in other words - competition elimination) and become a market leader in that respective industry. WSP is a powerful company with cash, capital, and influence. With these attributes, it is able to buy out competitors in an industry, expand on its current market presence, generate revenue and free cash flow, and repeat the same process over again. 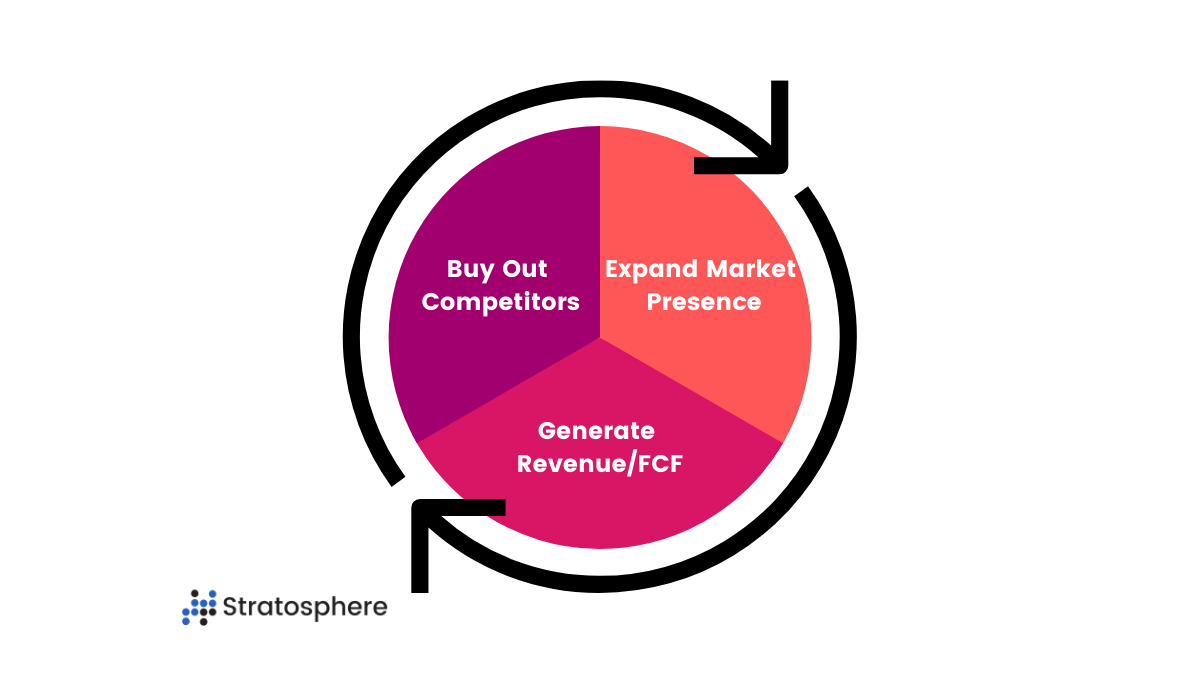 This step-by-step process is what allows WSP to be so dominant in so many industries, providing an abundance of consulting services to its clients.

The ability to consolidate and be a multi-disciplinary engineering firm allows for cross-selling abilities in professional services across the regions it serves.

A prime example of WSP’s business strategy can be seen with its recent acquisition of Golder Associates. Golder Associates is a large environmental and geo-sciences engineering firm, operating out of 30 countries, with over 7,000 employees.

This deal, worth $1.14 billion, paid in cash, allows WSP to expand its environmental and geotechnical services.

Additionally, WSP’s mindfulness of environmental factors and sustainability will set the company up for success in the future. There is no doubt the focus on ESG (i.e., environmental, social, and governance) factors are of growing importance in today's world. WSP is directly involved with projects that affect the environment, so its diligence in this area should pay dividends in the future, figurately and literally.

The biggest risk with WSP is its reliance on mergers and acquisitions to grow. Despite having previous acquisitions that helped to further strengthen the company, there may be some that hurt the company more, especially if valuations rise to levels well above the historical range in which WSP worked.

If WSP overpays for engineering firms, incremental ROIC (i.e., return on invested capital) could be lowered substantially, which reduces ROIC over the long run and hurts WSP's reinvestment capabilities. As the company is starting to buy out larger companies, it should ensure it continues to operate with immense discipline and abide by stringent M&A criteria so as to not allocate capital in a value-destroying manner.

WSP should also ensure each company acquired by WSP meets a high standard of quality. If valuations rise, WSP may move down the "quality curve" and purchase lower quality companies that were identified as good targets but turn out to be poor. WSP's ability to provide quality services with some of the best professionals in the engineering world is an image that it must protect at all costs.

Reputation is everything for WSP. Without its reputation and reliability in the professional engineering services, WSP could set itself up for disaster. We strongly urge investors to constantly monitor how new acquisitions impact margins, free cash flow, and ROIC.

WSP is a first-class company when it comes to providing quality services related to engineering consulting. Its diverse selection of services along with its wide global client reach to clients allow for strong market presence and profitability.

In terms of acquisitions, WSP continues to purchase engineering firms around the globe that uphold its strong reputation and spur strong financial growth.

WSP's Global Strategic Plan focuses on its people, expertise, and operational excellence. These three pillars will help strengthen this business further from the inside out.

The forecasted strong intermediate-term demand for infrastructure provides an excellent foundational tailwind on which WSP can build (no pun intended). We think WSP is a name to own in the engineering and infrastructure space.